While you may be able to fake knowledge of the current events in Greece by shaking your head, mumbling "Merkel," and occasionally citing the latest headline that you've read, you'll be able to add much more to the conversation with this quick primer on what's going on and how it happened. Let's start in 2001.

2001
Greece joins the eurozone. According to a BBC article from 2001, "To qualify for euro membership, the Greek Government had to adopt a tough austerity programme, making deep cuts in public spending." Sounds familiar...

Even with relatively high debt to GDP when joining the eurozone, the Greek government was able to claim a deficit of less than 1% of GDP. Unfortunately, those numbers were compiled with creative accounting, and it was actually more than 3% in 2000 and every year since:

2003
While Greece's government was still hiding its true budget numbers, France and Germany both overspent beyond the terms originally outlined for eurozone members under the Maastricht Treaty. These rules included government debt no higher than 60% of GDP and annual deficits no more than 3% of GDP.

As the BBC quotes the former finance minister of Greece, "The view was that, OK, if the big boys won't adhere and impose discipline on themselves, they're going to be more relaxed in enforcing the treaty [on us]."

2004
Greece elected a new government, and the new bookkeepers realized the financial deception. While the previous government's budget stated the deficit would be 1.5% of GDP, the true deficit would actually be around 8.3%. However, the 2004 Olympics in Athens took precedence over any major cuts or reforms.

Meanwhile, creditors saw Greece's link to the euro and stronger economies as a guarantee on any lending to the country. The 10-year bond yields for Germany and Greece remained close up until late 2008.

2009
Standard & Poor's cuts Greece's credit rating from "A" to "A-," and it will end the year at "BBB+." Rather than falling to within the original guidelines of 60% debt to GDP, it's clear that Greece's ratio is heading the other direction: 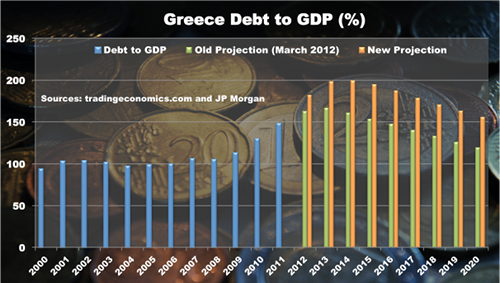 2010
Greece plans to reduce its deficit to less than 3% in 2012. It will miss by roughly 4%. Around May, S&P cuts Greece's credit rating to junk, and the eurozone and International Monetary Fund bail out the country with 110 billion euros after Greece agrees to implement budget cuts. Greek citizens protest the cuts, and three are killed in a riot.

2011
Greece aims to cut its deficit to 1% by 2015. The latest forecast puts that number at 3.1%. The first bailout isn't enough to extinguish the worry and structural financial issues of Greece, and in October, with its 10-year bonds yielding more than 20%, it receives another 130 billion euro bailout, while its private creditors are forced to take a 50% loss on their bonds' value.

2012
The forecasts for the second bailout putting Greece's debt-to-GDP ratio under 120% by 2020 were a bit optimistic, as the latest forecasts put 2020 debt to GDP at 156%. Each debt deadline for Greece is a hurdle that it could trip over and default on -- the latest being a 5 billion euro debt repayment due Friday, which it has successfully raised enough money to fulfill. Unemployment keeps rising: It's now at 25%, with youth unemployment past 58%. European Central Bank president Mario Draghi said this summer that the ECB will do anything it takes to protect the euro, but he also recently declared the ECB was "by and large done" with helping Greece.

The (debt) cliff notes
The Greek debt crisis contains many major themes, all of which can be brought up at a cocktail party to deflect attention from what you may not know. Who's to blame for out-of-control credit? Lenders, rating agencies, governments, or Greek citizens? Who should pay for the cost of fixing Greece? Can the eurozone dictate policy to a sovereign country? Is the eurozone strong enough to revive a failing state, or strong enough to stay together if a state defaults?

European companies like Vodafone (NASDAQ:VOD), which in its first half of the year saw revenue from southern Europe decline nearly 10% and realized a smaller-than-expected rise of almost 2% in Germany, could continue to struggle across the continent. Meanwhile, American companies with large exposure to Europe like Ford (NYSE:F), which expects to lose more than $1.5 billion in Europe over the year while it closes three factories, are also exposed to risk from this Greek saga. Even a cigarette company like Philip Morris International (NYSE:PM) can't catch a break; its cigarette volume fell in the double digits in Greece, Spain, and Italy in its latest quarter.