In 2012, studios finally began to understand how to leverage the power of the IMAX (NYSE:IMAX) network. We're seeing fewer kids films, which never performed well in IMAX, and more action and IMAX-exclusive content.

The year started with Mission Impossible's incredible exclusive IMAX shots, continued with the resounding success of Disney's (NYSE:DIS) The Avengers and Warner Bros.' The Dark Knight Rises, and recently MGM and Sony's (NYSE:SONY) Skyfall. Today, IMAX announced that Warner Bros. Pictures, a division of Time Warner (NYSE:TWX) has signed on for another 20 films over the next three years to build on this success.

The success of IMAX is really a symbiotic relationship for studios and IMAX. A studio gets to charge a premium for its blockbuster movies and IMAX takes about 20% of the box office for their services. As the network grows, the leverage of the network flows straight to IMAX's bottom line. But IMAX has to have a steady flow of movies for that to happen. Now IMAX has at least 20 more titles to add to its film slate.

Profiting from the premium film movement
I still think IMAX is one of the best ways to play the movie industry because it isn't tied to a single film's success the way a studio is, and it has a growing network to leverage going forward. You can see below that revenue and profit have both exploded in the past three years and margins are expanding as well. 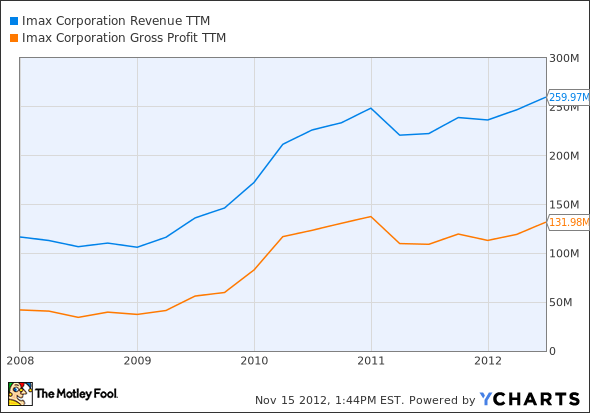 This trend will only continue as the company adds local content internationally and overall box office grows.