Despite news that politicians are working on the "fiscal cliff," stocks are starting the day off in the red, with the Dow Jones Industrial Average (DJINDICES:^DJI) and the broader S&P 500 (SNPINDEX:^GSPC) down 0.36% and 0.44%, respectively, as of 10:15 EST.

The micro view
After yesterday's close, Dell (NASDAQ:DELL.DL) reported its results for its fiscal third quarter ending Nov. 2. The Austin, Texas-based PC manufacturer earned $0.40 per share, missing the consensus estimate by a penny. Revenue also came in below expectations at $13.7 billion versus expectations of $13.9 billion. The worst-performing business segment by far was "Consumer": revenue fell by nearly a quarter year on year. The market's response is unequivocal this morning, with shares down 6.2% at 10:15 a.m. EST.

On Wednesday, I suggested in this column that Hewlett-Packard's (NYSE:HPQ) daily outperformance was related to that of Cisco (NASDAQ:CSCO), which had posted excellent results after Tuesday's close, as the two companies exhibit high correlation between their earnings per share. We appear to be witnessing the same effect -- in the opposite direction, mind you -- linking HP's performance today to Dell's, with HP losing 2.75%. In theory, the link should be even tighter, as Dell is more similar to HP than Cisco is. On a long-term basis, HP, Cisco, and Dell have performed horrendously: 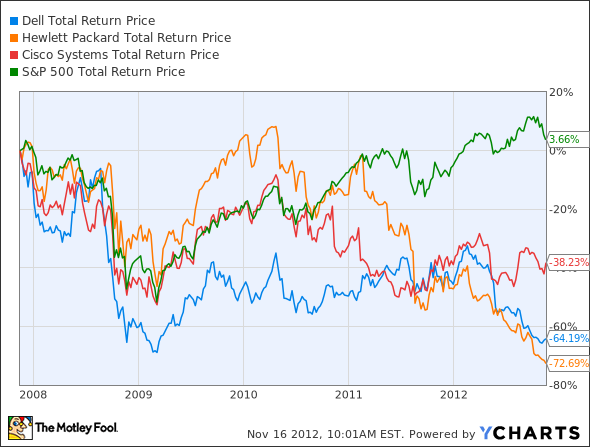 All three tech stalwarts are in some stage of a turnaround and are cheap on the basis of estimates for next 12 months' EPS estimates. HP, arguably the most troubled, is also by a wide margin the cheapest at 3.6 times its EPS estimate. However, Cisco's shares look to me to offer the best prospects, on a risk-adjusted basis. If you're interested in a comprehensive assessment of that opportunity, click here to receive our technology analyst's premium report, which includes a full year of updates.