You may be tired of all the "fiscal cliff" commentary, but that may be due to the walls of text that accompany every article. What's been missing? A fiscal-cliff picture book.

Here's a set of graphs and charts from the nonpartisan Congressional Budget Office showing what would happen given either no compromise or what it calls an "alternative fiscal scenario." In its alternative, all tax cuts except the payroll tax cut are extended, the alternative minimum tax is indexed for inflation, Medicare payment rates are not cut, and the automatic spending cuts don't happen.

The deficit would shrink to a measly 0.4% of GDP by 2018 given the fiscal cliff, whereas the alternative only cuts it to 4.2% of GDP. These deficits, of course, feed into total debt. 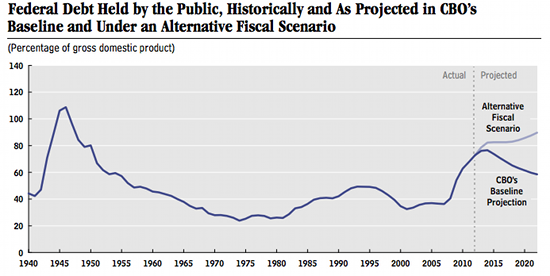 The alternative scenario leads us to nearly 90% debt to GDP, whereas the cliff takes us less than 60% debt to GDP. What are the specific contributors to this debt and deficits?

The deficits broken down

The tax policies have the greatest effect on deficits going forward, with spending cuts accounting for a much smaller portion. The scary part here, as any credit card holder might know, is the growing debt service. That's the interest the government has to pay on its debt. What do we get for these higher deficits? 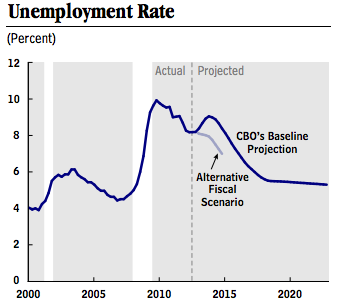 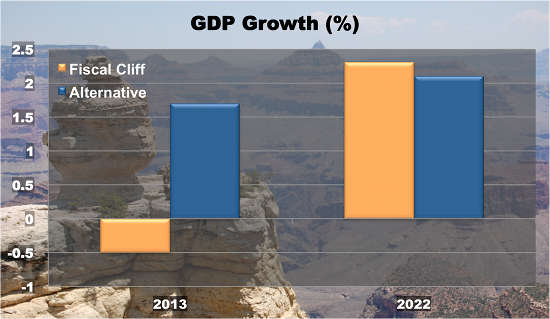 Going off the cliff will earn us a bruise on our GDP, shrinking it about 0.5% in 2013. The alternative, meanwhile, allows us to grow more than 1.5%. In 2022, however, the increased debt burden for the alternative takes a small chomp out of future GDP.

Don't be a lemming
As these pictures illustrate, we can survive no matter what policies are enacted. While individual companies that rely heavily on the government might be stung -- e.g., Lockheed Martin (NYSE:LMT) which takes in 82% of revenue from government business, or General Dynamics (NYSE:GD), which counts on the government for 69% of revenue -- it also shows that cuts to program budgets will only be a small part of an overall solution.

And even with the S&P 500 (SNPINDEX:^GSPC) falling more than 5% since the election, there are plenty of reasons for long-term optimism beyond the next year. Recent corporate investments -- such as GE's (NYSE:GE) $200 million in financing for two liquid-natural-gas plants that GE, along with partner Clean Energy Fuels (NASDAQ:CLNE), will bring online in 2015 -- might be a sign that the large cash piles corporations have been sitting on through the recession will finally be put toward infrastructure and future business investments.