"Too big to fail" seems like one of those phrases that should be banned after excessive use. Unfortunately, we still need the words, because the problem of too big to fail, or TBTF, hasn't disappeared. And as financial institutions grow, they can cause increasing damage to society if they fail. While there are solutions to the TBTF issue, they also drive banks to perhaps even riskier behavior.

The consolidation of banks
Before looking at the solutions, let's take a look at the problem: 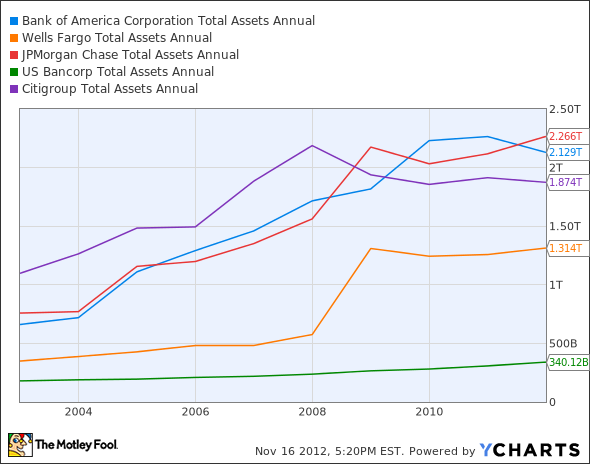 With the exception of US Bancorp (NYSE:USB), the top five banks in America took on hundreds of billions more in assets on their balance sheets in the past decades. Wells Fargo (NYSE:WFC) acquired Wachovia in 2008. JPMorgan Chase (NYSE:JPM) added Washington Mutual and Bear Stearns in 2008, after merging Chase and JPMorgan themselves in 2000. Bank of America (NYSE:BAC) purchased LaSalle Bank in 2007, and Countrywide Financial and Merrill Lynch in 2008. Citigroup (NYSE:C) lost out on the Wachovia acquisition, but managed to make it to over two trillion in assets in 2008. And although US Bancorp didn't go on an acquisition binge during the financial crisis, it acquired part of Bank of America's trust administration business last year, which added $1.1 trillion in assets under administration.

The best example of bank consolidation is from the Federal Reserve Bank of New York's president, William Dudley:

The consequences of TBTF
What's the big deal with bigger banks? Shouldn't the larger sizes allow for more efficient banking? It might, but it also puts pressure on the government to rescue any institution at risk that could have rippling effects through the economy. Because many consider government intervention a given, these banks can take on more risk, and are incentivized to become even larger and more complex in order to ensure that they remain TBTF.

So, smaller banks are at a disadvantage, while larger ones can grow to a size bigger than the optimal and efficient scale. And, for those institutions that do fail, the risk taken might end up being paid for by the taxpayers if the government's investment doesn't go well.

Plenty of banking and economics leaders have called for a more fragmented banking system. This even includes former Citigroup CEO Sandy Weill, who states, "I'm suggesting that they be broken up so that the taxpayer will never be at risk, the depositors won't be at risk, the leverage of the banks will be something reasonable..."

The simple solutions
In the past, incentives have pushed banks to grow larger. In the future, we need to incentivize less risky behavior and deter the race to gain TBTF status.

One such solution is what Sandy Weill advocated: Break up the large banks so that one bank doesn't hold an inordinate amount of assets. But, the interconnected nature of banks would require further steps, or else even small banks could topple the larger economy.

"Basel III," which is the third set of rules issued by the Basel Committee on Banking Supervision, addresses part of the issue with higher capital requirements and a mandate that banks hold 30 days worth of liquidity. It also requires that banks that are deemed a "globally systemically important financial institution," -- known as SIFI, and basically the TBTF banks -- have higher capital requirements. This should help reduce the incentive to grow into a TBTF institution, as there would be more regulation in doing so.

Unfortunately...
Opponents question what the definition of a SIFI bank would be under the regulations, how regulators can know which banks would be important in a crisis, and the fact that smaller institutions might just mean that the government would have to save several separate banks instead of one large bank.

Others question the structure of the Basel regulations, as they were conceived around the concept of risk-weighted assets: riskier assets should be backed with more capital. As Reuters' Felix Salmon explains:

As the regulations push banks to hold safer assets, banks might find assets that appear safe but have hidden risks that we have yet to discover. As Donald Rumsfeld eloquently put it, "...there are also unknown unknowns -- there are things we do not know we don't know."