The Dow Jones Industrial Average (DJINDICES:^DJI) prides itself on being a "barometer of the times." Sometimes that means hanging on to fading blue chips because they work in fading industries. That's totally fair. Right now, the technology portion of the Dow is falling nearly in unison, signaling a wide-ranging shift in the sector: 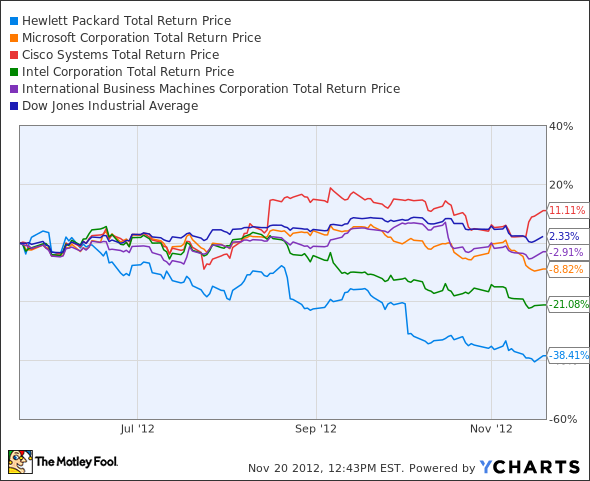 Cisco Systems (NASDAQ:CSCO) is the only tech stock to outperform the Dow over the last six months, even if you assume dividends to be reinvested across the board. The networking giant is showing signs of life after a couple of hard years. The other tech stocks have the anchor of dying PC sales hanging around their necks.

But one tech-oriented Dow member plunged far below the rest. Hewlett-Packard (NYSE:HPQ) has destroyed about $75 billion of shareholder value over the last two years, including $2.5 billion just today. The former colossus is now the second-smallest Dow component and is sinking fast: 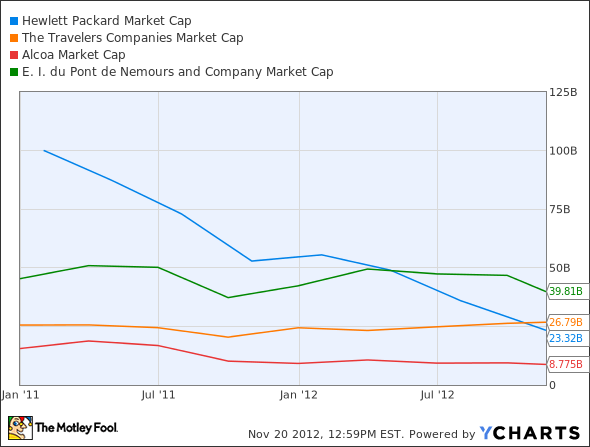 Last night's fourth-quarter report capped a terrible year. Full-year sales fell 5% amid shrinking margins, and non-GAAP earnings per share plunged 17%. Sales fell in three of HP's five divisions, with the exceptions being a flat financing arm and the acquisition-boosted software segment. Even there, software results were disappointing -- and the Autonomy buyout may have been based on downright fraudulent financial figures.

HP wrote off $8.8 billion of Autonomy's $10 billion purchase price. Autonomy's books must have been stir-fried something fierce if nearly 90% of the company's value turned out to be a mirage.

My point is that most of HP's troubles appear to be its own -- not those of the wider tech sector.

I know the Dow doesn't like to fiddle with its roster unless its hand is forced by acquisitions or spin-offs. But HP may have to split into a handful of more efficient and manageable companies before long, which would give the Dow's stewards an opportunity to bring on a less troubled replacement.

Some otherwise obvious candidates can be ruled out because their share prices are way too high. Google (NASDAQ:GOOGL) or Apple (NASDAQ:AAPL) would skew the Dow from the get-go. But storage specialist EMC (NYSE:EMC) and mobile-processor designer Qualcomm (NASDAQ:QCOM) would blend reasonable share prices with modern and relevant business models, making them excellent replacements for a deathly ill Hewlett-Packard.