The draw of an investment's potential is always huge for investors. An untapped market with billions of dollars of potential could produce the next 10-bagger we've all been waiting for. This seems to be the investing thesis behind Solazyme (NASDAQ:TVIA) the alternative fuel, premium oil, algae growing company.

Amid all of the excitement about deals with Bunge (NYSE:BG) and Archer Daniels Midland (NYSE:ADM) investors seem to be glossing over the fact that the company's revenue declined in the third quarter and net loss nearly doubled. This isn't exactly a company that's currently operationally knocking it out of the park.

Don't buy potential
I've been covering renewable energy for over two years for The Motley Fool, and if there's one lesson I've learned it's: Don't buy the hype. Solazyme is looking eerily similar to A123 Systems, a situation where investors bought into potential and the clout of its high-profile auto partners. It happened again when investors bought into the hype of new solar technology like CIGS, an amorphous silicon that never generated much revenue but had cool and promising technology. Now we're buying into an alternative fuel and other random oil products company despite failures in these markets in the past. Let's not forget that ethanol has been an alternative we have talked about for decades that has never been truly economically viable.

The big challenge in the biofuels and oils markets is that once you have a product that becomes successful your feedstock price goes up. Take corn-based ethanol as an example. When ethanol production reaches a critical mass it also increases the demand for corn, which raises the price and reduces margins for ethanol producers. On the flip side, a market with attractive prices will see prices decline once you introduce an alternative product that increases supply. Market forces work against you on both sides.

Big potential, but still just potential
What Solazyme wants investors to buy into is the potential of increase in capacity, which it says is on a path for 400,000 metric tons in 2016. But there are a number of challenges to overcome before that capacity translates into big-time profits, whatever those profits may be.

The challenge is the same as it was for A123 Systems, which had analysts buzzing about adding capacity to unproven markets with exciting and unproven partnerships. The reality of both situations is that companies that make biofuels, and a variety of other product alternatives, are unproven in the market on the scale that would be necessary for survival. All we do know is that Solazyme and competitor Amyris (NASDAQ:AMRS) are posting losses. Only Rentech (NYSEMKT: RTK), which is the best performing stock of the group, has swung a small profit. 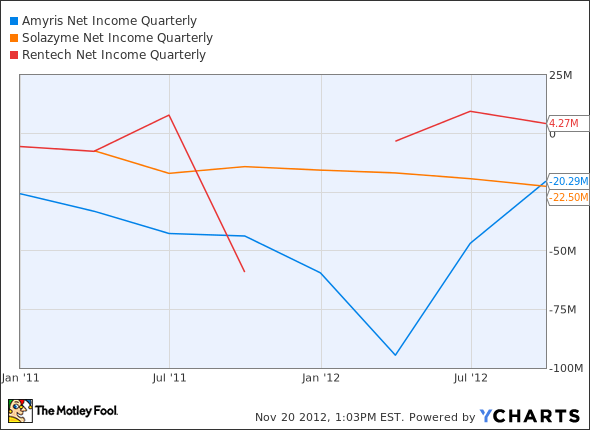 High risk, high reward
Maybe we'll revisit this stock in five years and talk about what a smashing success it was. But investors should be aware that the risk is incredibly high and the list of winners in this kind of market is short. The list of losers who failed to live up to potential is long and painful.

I am keeping an eye on Solazyme's growth in interesting new markets, but until it generates a significant amount of revenue and makes major progress toward profitability, I see no reason to buy. I've seen too many business failures due to stocks built on hope and potential to be duped into buying this one right now. I'd rather miss out on the early pop than risk buying another dying company just before realizing that the potential upside wasn't as big was thought.

I'd prefer to stick with established oils, like oil.