Even though oil stocks are down due to declining demand from slumping economic growth around the world, spin-offs from Marathon Oil (NYSE:MRO) and ConocoPhillips (NYSE:COP) still have rewarded shareholders. Last month, Murphy Oil (NYSE:MUR) rose significantly after a announcing that it would spin off its retail business to shareholders, declare a special $2.50 dividend, and initiate a stock buyback program of up to $1 billion.

Foolish investors looking to profit from spin-offs need to analyze each transaction individually. Oil companies have many reasons to divest businesses: stable income units such as marketing can operate freely away from volatile exploration activities; there could be a desire to streamline operations; tax considerations could be paramount; or the company could be seeking to dispose of unproductive units. Activist investor Daniel Loeb of Third Point Capital has forced Murphy Oil management into its recent action.

Tremendous upside for Murphy Oil
Loeb contends that Murphy Oil should be worth $90 a share, up from around $56.23. In a letter to the shareholders of Third Point Capital, Loeb states that he is urging Murphy Oil to focus on its core assets and:

As Murphy Oil has a market cap of under $11 billion (much of that from a recent 28.50% rise in the share price), these moves advocated by Loeb would streamline the company and augment the cash position. At present, there is now $6.70 in cash for the less than 200-million outstanding shares.

Are Occidental Petroleum and Hess next?
Foolish investors looking for the next oil companies likely to restructure should consider Occidental Petroleum (NYSE:OXY) and Hess (NYSE:HES). The price-to-book ratio and cash flow for both are low, as revealed by the following chart. As a result, the shareholders would most likely gain from a spin-off that maximized asset value and streamlined the balance sheet of each, particularly for Hess with its excessive debt. 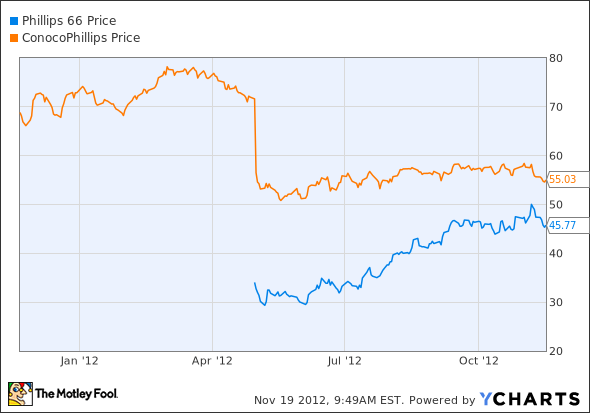 The shareholders of Marathon Oil and Marathon Petroleum have also gained since the split: 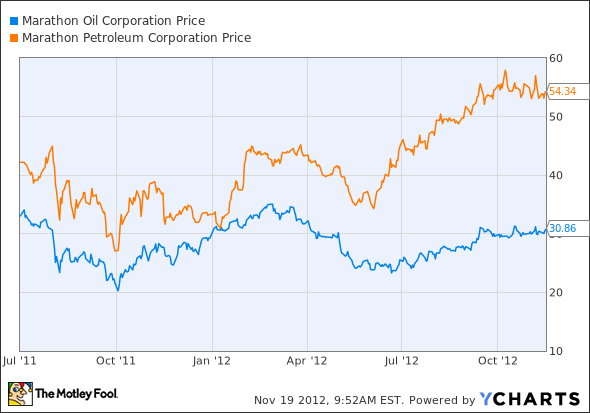 The more spin-offs the better in big oil
Major oil companies are ideal candidates for spin-offs. Within the corporate structure, divisions with contrasting cultures such as marketing and oil exploration inevitably clash for finite resources, ranging from management talent to investment capital. Shareholders gain from the spin-offs as the separated units can then function, and profit, unencumbered by the other divisions. This provides a much more accurate stock price for the spun-off entities, rather than a diluted one for the overall company. That enhances shareholder value in the long term, which is the objective of every Foolish investor.