The fourth quarter is traditionally the best period for retailers, and J.C. Penney (OTC:JCPN.Q) is heading toward ending a yearlong slump that has seen its share price fall more than 50%. CEO Ron Johnson is hoping to invigorate the company with a new retail experience as he did at Apple (NASDAQ:AAPL) and Target (NYSE:TGT). So far, it's working, as sales are more than double in the refurbished shopping areas than in the rest of the stores.

The best from Apple and Target
Johnson is aiming to create the popular town mall concept inside J.C. Penney department stores. When the initiative is done, J.C. Penney stores will have 100 shops with different merchandise and hipper designer brands. The stores that have already been revamped feature wide aisles that Johnson calls "streets," complete with coffee bars, ice cream stands, and iPads to shop online. Upgrades to 11% of the stores have doubled sales already in those areas.

For J.C. Penney, Johnson is trying to combine the best of what he implemented at Apple, with the Genius Bar, and at Target, with the "cheap chic" motif. By doing this, he aims to move J.C. Penney away from the fate of other mid-level department stores, such as Sears Holdings' (NASDAQ:SHLDQ) Sears stores. Johnson traveled widely to formulate his model, meeting with executives from Gap, J. Crew, and Ralph Lauren, among other trendy retailers to determine what would work best for J.C. Penny.

A work in progress
In addition to reconfiguring the stores, Johnson is revising the overall shopper experience at J.C. Penney in a more holistic manner. Like Starbucks (NASDAQ:SBUX), the changes are designed to encourage the shopper to linger. The new J.C. Penney stores carry 25% less merchandise, with the hope that the wider aisles, high-tech features, and more open spaces will encourage consumers to stay longer and buy more, as if they were filling up on another grande Caramel Frappuccino at the local Starbucks.

Shops for Liz Claiborne, Levi's, and others have been fashioned at about 700 of the 1,100 J.C. Penney stores. Johnson aims to have 100 shops in these 700 stores by the end of 2015. The remaining 400 stores are in small towns and won't receive a full makeover.

Plenty of cash until earnings rebound
If the new design works as well as it has so far, revenues will surge, and there is plenty of liquidity to float the company until higher earnings come in. J.C. Penney currently has twice as much in current assets as current liabilities. Cash is down to $500 million, but that's from retiring long-term debt. Using cash to clean up the balance sheet rather than refinance in a time of low interest rates is a bullish sign that management is optimistic about the company's future. Fourth-quarter revenues traditionally increase from holiday shopping, and that will bolster the balance sheet by improving the cash position. 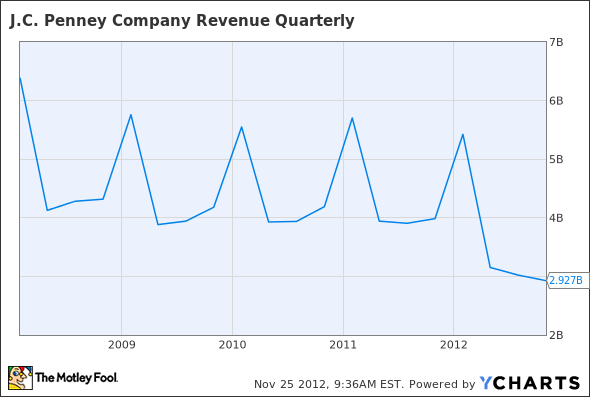 Superior value with huge earnings potential
With the falling stock price, J.C. Penney now has very compelling valuations compared with others in the industry. As revenues are doubling in the new in-store units and earnings per share are projected to increase more than 150% next year, it doesn't appear as if investors will be catching a falling knife with this company. The combination of rising sales with falling debt should increase earnings.

The mother of all short squeezes
What could take the share price even higher along with the improving earnings and cleaner balance sheet is the potential for a massive short squeeze. The market has overreacted to the company's declining cash position because of the high cost of refurbishing the stores, combined with the slumping sales. As a result, the short float is over 30% -- merely 5% is considered troubling. Any rise in the share price will be the mother of all short squeezes, rewarding investors with a long position even more.

Ultimately, the successes at Apple, Starbucks, and Target clearly demonstrate that Americans want a retail experience that goes beyond clicking a muse and waiting for a package to arrive. Under Johnson, J.C. Penney is changing in an attempt to profit from what the consumer wants. That approach is working so far, and if it continues, the rising share prices in J.C. Penney's future will be what Foolish investors desire.