Europe has dominated the news in 2012 with pictures of unrest and violence. We've seen the footage: Petrol bombs exploding in the streets of Greece, massive protest marches in Spain, and even France and Germany -- the pillars of the eurozone's foundation and the continent's two largest economies -- at odds over which direction to lead the continent. Now the latest bombshell has hit, with political parties advocating for independence referendums winning a decisive majority in the parliament of Spain's region of Catalonia.

It seems no state in Europe is safe from social and political unrest, but economic trouble isn't limited to countries east of the Atlantic. Here in the United States, Americans have been hit with high unemployment, political uncertainty, and dwindling income. Why haven't social unrest and other tremors hit American shores? Is it just a matter of time before the U.S. mirrors Europe's chaos?

A history of violence
Reviewing European history is a study in volatility. Until 1945, the continent engaged in too many regional conflicts to count, and scattered dictatorships, small-scale wars, and the looming Iron Curtain pressed on into modern times. Only recently has Europe known peace and stability, and unfortunately, history plays a major part in today's instability.

The current Eurozone crisis hit a flashpoint over economic woes, but it has evolved into something far more dangerous. Anti-German anger has exploded in Greece, one of the hardest-hit nations. Certainly, German Chancellor Angela Merkel's demands for austerity and tough government cuts haven't helped matters. There's a historical tie to this as well, however. Greece has recently demanded reparations from Germany over World War 2 war crimes, with the debate still going as the Greek Finance Ministry calculates its claims. It's been less than 70 years since the war, which enveloped nearly the entire European continent, ended -- leaving behind plenty of lingering animosity that the current crisis will only exacerbate.

The U.S., meanwhile, hasn't had a lengthy war on its soil since 1865. While the recent flurry of secession petitions to the White House drummed up news, America lacks the historical context of Greece's postwar pains or Spain's rule by dictator Francisco Franco, which ended less than 40 years ago.

While America has had isolated moments of social unrest over the years -- consider the Civil Rights movement in the 1960s or the Haymarket Riot during the labor movement of the 1880s  -- the country's history of a stable government and diverse yet united population means that the divisive nationalism of Europe's crisis hasn't exacerbated things in the U.S. The violence of Greece's streets is as foreign to modern America as Greece itself.

The economics of strife
That's not to say that there isn't an economic point to this all. For all of America's woes, it's much worse across the Atlantic.

Unemployment may not be great in the U.S., but it's a sight better than what's going on in Europe. 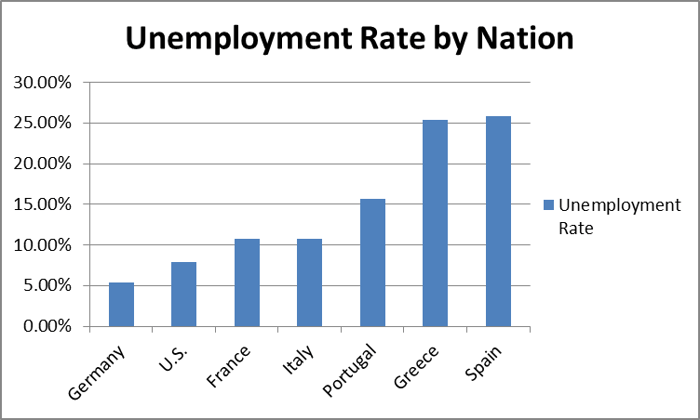 Even debt-plagued France and Italy look far better than Greece and Spain, where social upheaval has hit the worst. By comparison, the U.S. and Germany look extremely strong.

Youth unemployment is even worse. In the U.S., young people suffer from crushing joblessness at a rate of 16.8%. But youth unemployment in Europe is far worse: 21% in the U.K., 34.5% in Italy, and chart-topping rates of 53% and 55% in Spain and Greece, respectively.

This is a major economic driver of unrest. As young people without jobs face considerably bleaker futures -- youth unemployment damages young people's future earnings and career paths significantly -- they'll either leave their home nations for greener pastures or protest against a system that's failing them. And it has already happened: Greek youth have fled the country in droves, while the Greek political party Syriza, which has made no attempt to hide its disdain of European austerity, captured 33% of the youth vote in the recent national election.

The consequences of youth unemployment aren't limited to Europe. Such high unemployment also racked Egypt, the poster child of modern social upheaval, right before its own revolution in 2011. Continued youth unemployment hasn't helped the situation there, either, as the nation remains mired in violence and unrest. If current trends continue in Europe, expect the same.

The U.S., by comparison, hasn't had to cut back on spending yet, what with the centrally printed dollar and continued budget deficits. The economy's still flying along, and the Dow Jones Industrial Average (DJINDICES:^DJI) sits above 13,000. Widespread social unrest hasn't taken roost here. But what would it take for it to do so?

What does chaos look like?
Two major events -- one almost upon us and one slowly creeping up over the horizon -- could bring the sort of violence and unrest Europe's seen to American shores.

The dreaded fiscal cliff is the first real austerity measure set to hit the U.S., with its combination of tax hikes and spending cuts. JP Morgan (NYSE:JPM) has predicted, assuming Congress draws up no deal to avoid the fiscal cliff, that the first quarter of 2013 would see GDP contracting by 2%. For the full year, GDP would increase by only 0.2% with the fiscal cliff in effect for merely six months.

Other outlooks agree on the gloomy sentiment, with Morgan Stanley (NYSE:MS) claiming that falling off the cliff would lead to three straight quarters of GDP contraction and a major recession. Combined with the effects on industries -- companies in the defense sector, such as Boeing (NYSE:BA) have already announced job cuts due to government spending cuts -- the fiscal cliff would likely lead to higher unemployment and reduced consumer spending.

In that scenario, with Congress failing to act and more people down on their luck, it's only natural that unrest would grow in the short term. In the long term, however, America could face the same problem of youth unemployment that has plagued Europe.

As education budgets dwindle and companies cut back on training programs for new employees, America's youth is left with few options. Many have turned to furthering their education, while others have simply dropped out of the labor force entirely. Baby Boomers staying in the workforce longer haven't helped young people, either; more youth now enter a workforce that offers fewer opportunities.

All of this sets up a scenario where youth unemployment will skyrocket, and as seen in Greece, Spain, Egypt, and more hard-hit nations, that's a number that goes hand in hand with chaos.

Roads to reason
America has been fortunate that Europe's social unrest hasn't crossed the Atlantic yet, though it may now be only a matter of time. The U.S. is afforded several advantages over Europe, however. Without the divisive history of the continent, Americans won't have to fight against national pride and cultural heritage to find the path to economic stability. And we have the luxury of time to conquer the fiscal cliff and youth unemployment: With those events yet to strike, the U.S. can search for the right solution for the economic storm.

The economy won't wait forever, however. If the U.S. fails to avoid Europe's mistakes, the continent's crisis and all its consequences will someday come to a town near you.