It can be heartbreaking to see people go hungry. It's also hard to see so many people go without adequate shelter, health care, and education. These tragic stories represent the bad side of wealth inequality, and people across the country live them out every day. But is there a good side to inequality -- one that is less obvious than the negatives?

A look at American inequality
We know that the wealth gap has increased of late: 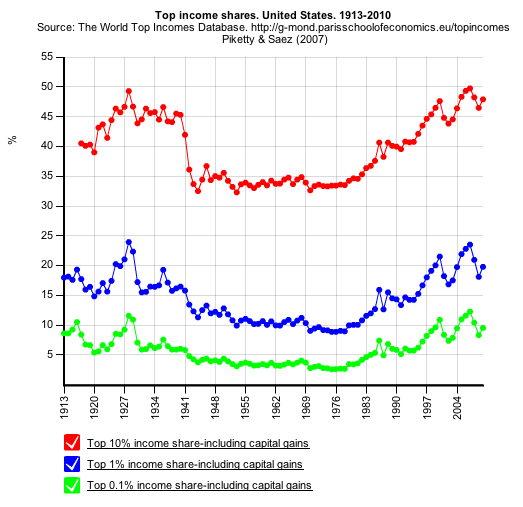 As another example of inequality, in the first year of recovery in 2010, the top 1% earners took 93% of income gains. That is, the incomes of the top 1% increased more than 11%, while the incomes of the remaining 99% gained 0.2%. Incomes are extremely unequal -- and the gap is only widening.

But what's the big problem with inequality? Besides the apparent social issues, The New York Times found research observing that "in rich countries and poor, inequality strongly correlated with shorter spells of economic expansion and thus less growth over time." As research goes, however, the numbers can say many things.

The positives of inequality
On the flip side, as the Harvard Business Review notes, "because inequality puts more resources into the hands of capitalists (as opposed to workers), it promotes savings and investment and catalyzes growth." The authors describe how they found a relationship where both high and low levels of inequality hurt growth, and that the optimum inequality was around the year 2000 -- or perhaps a little more unequal than that.

It's strange to think that inequality should be good for the economy. Looking at the income share of the top 1% versus GDP growth, the worst years of the Great Depression occurred after the 1% earned nearly 25% of the national share. However, bad years also occurred in the mid-1940s and early 1970s, when the 1% earned about 10% of total income: 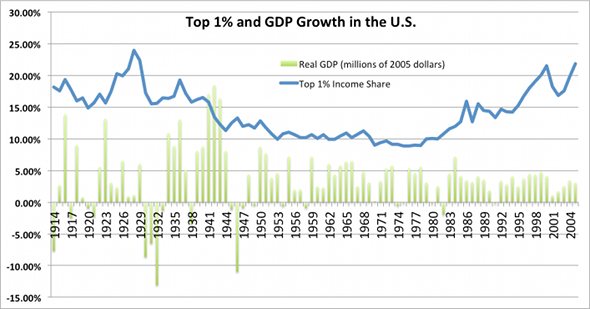 The relationship between inequality and prosperity in the U.S. is fuzzy, as there are many factors that determine economic growth besides income equality.

Income trends
One definite aspect of inequality is that today, the top earners take more from wages and salaries and less from capital income than they did in the past. Whereas the top 1% of wages and salaries took home about 5% of the total in 1970, this figure was more than 12% in 2007. This also correlates with the incredible pay packages seen only in the last few decades:

There are also other standouts: the CEOs who only take $1 in salary. Apple's Steve Jobs was famous for this, but joining him are Facebook's Mark Zuckerberg, Tesla's (NASDAQ:TSLA) Elon Musk, Hewlett-Packard's (NYSE:HP) Meg Whitman, and Google's Larry Page, among others. Whereas a pay package like David Simon's gets voted down by shareholders with a "say on pay vote," these dollar-bin CEOs further align themselves with shareholders with rewards closely tied to stock performance. For example, as Tesla struggled with cash flow in 2008 and 2009, when Musk himself "had to borrow money for rent," investors could at least comfort themselves that Musk wasn't bankrupting the company with an extravagant salary. And while HP's poor performance can't be blamed on Meg Whitman's salary, the $7.2 million severance package for previous CEO Leo Apotheker doesn't help its declining prospects.
A stronger union
With the data painting many pictures of the effects of inequality, both sides agree that it's important to maintain the sense that society is fair. While that could be accomplished in many ways, the easiest seems to be, well, actually making society fair. As the Occupy protests demonstrate, some believe society is rigged too in favor of the wealthy. However, as a Gallup survey indicates, 50% of people still believe in the opportunity for a poor person in this nation to get ahead by working hard. That's up from 38% in 1994.
This article represents the opinion of the writer, who may disagree with the “official” recommendation position of a Motley Fool premium advisory service. We’re motley! Questioning an investing thesis -- even one of our own -- helps us all think critically about investing and make decisions that help us become smarter, happier, and richer.