Americans were quickly scalded by overheated mortgages, and we learned our lesson. Combined, outstanding mortgage debt and home equity lines of credit shrank more than $130 billion in the past quarter. However, Americans now sit in a pot that will start to boil over, and we might be cooked before we notice the heat. Student debt numbers continue to get worse, and this will hamper America's future prosperity.

The student loan picture
The easiest way to grasp the current state of student loans is through two charts. This first chart shows total debt by type. Note that student loans grow from one of the smallest types to the second-largest in less than a decade: 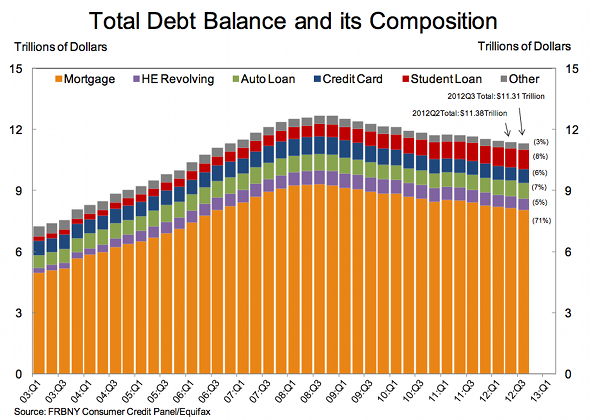 This second chart shows delinquencies by loan type. Delinquency rates have steadily increased over the past decade, perhaps with the rise of underperforming for-profit schools: 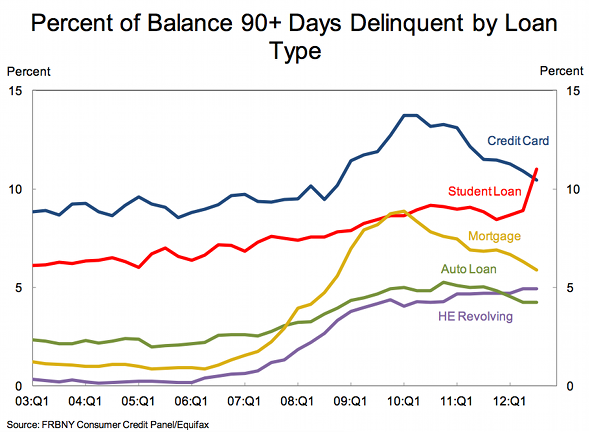 The New York Fed links the latest spike of more than 11% -- much higher than the worst delinquency rates of the mortgage market -- to "previously defaulted student loans that have been updated on credit reports this quarter." Because student loans cannot be defaulted on, ones previously written off have been counted again, adding $19 billion in delinquent debt and pushing up the past-due rates.

While this explanation might ease some minds because it means better credit reports and stronger financial positions to pay off the loans, it also represents the drag these loans will have on the economy because of their special quality: Student loans cannot be discharged through bankruptcy. As the largest lender -- the government -- takes its interest and principal from past students who are finally in stronger financial shape, there will be less money for other personal investments, from cars to homes to iPhones to retirement.

The bigger questions
This leads to the discussion of whether the government should provide these loans, whether students should take them, and why schooling costs have risen so rapidly.

The government should provide subsidized loans. It allows those who wouldn't have the resources to earn higher degrees, which are extremely important in finding employment and maintaining a stable social structure. Take a look at the difference in unemployment between those with bachelor's degrees and those with no college: 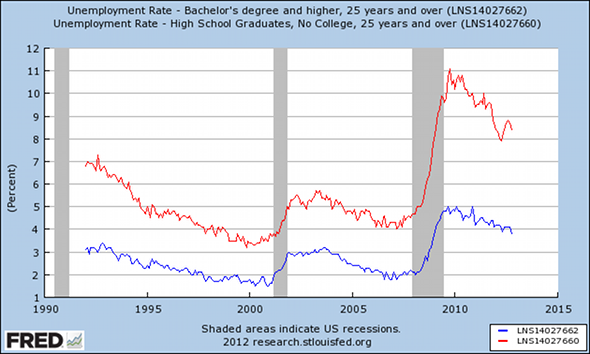 Unfortunately, students might have no choice but to take these loans, given the above picture. This turns the attention toward school costs. One cause of rising school costs is simply greater demand. According to the National Center for Education Statistics, college enrollment increased by 11% from 1990 to 2000 and by 37% from 2000 to 2010. For public colleges, state aid has suffered during the recession. The other driver has been labor costs -- but not necessarily of professors. Total university expenses grew 35% from 1993 to 2007, but administration expenses grew 61%. Meanwhile, a greater number of teaching assistants and nontenure professors are teaching.

The potential outcomes
If college debt scares away students from earning higher degrees, future productivity, innovation, and prosperity could be at risk. Even dramatic solutions like dismissing all student debt would only be a short-term cure, as that would treat the symptom instead of the cause.

There are many companies working to solve these issues. In primary education, K12 (NYSE: LRN) utilizes personalized curricula and online classes to, according to its website, outperform the norm in both reading and writing across all grade levels. However, some studies have concluded that such online schools performed significantly worse.

In higher education, companies like Apollo (NASDAQ: APOL) -- which runs the University of Phoenix, Bridgepoint Education (NYSE: BPI), and the Washington Post (NYSE: WPO) -- could have offered a low-cost option to higher degrees. But they have struggled as they run up against regulations like the 90/10 rule, which limits how much revenue can come from most government aid programs. And perhaps in a drive to recruit students, these for-profits exhibited high withdrawal rates of students, from Apollo's 66% to Bridgepoint's 84%, leaving students with debt and no degree.

In the end, the return on investment of fixing education may not be high enough for a for-profit organization to solve. All these stocks have underperformed the S&P 500 (INDEX: ^GSPC) this year, with the market beating the best performer by more than 15%. Perhaps the future is in open courses offered by MIT, Harvard, UC Berkeley, and the University of Michigan, as well as new nonprofit start-ups like Khan Academy.