Rumors about Andrew Mason and LivingSocial might spell the end of a flash-in-the-pan business model.

That was quick. Rumors of Andrew Mason potentially getting fired from Groupon ( GRPN 1.41% ) and LivingSocial letting go of 400 employees (about 9% of its workers) might be the last breaths from the major players in the daily-deal industry, only about four years since the craze began. What happened? What will happen?

Growth at all costs
Groupon grew at a tremendous rate. Early critics brought up its lack of competitive advantages compared to the numerous copycats, LivingSocial being one. In response, Groupon acquired plenty of its competitors. To grab market share, Groupon threw tons of money into marketing. In this flurry of acquisitions and advertising, Groupon forgot about accounting standards. It fixed its accounting issue, until another one came up. Board members left, new financial management was brought in. And now Andrew Mason, the founder who started it all, may be cast aside.

Mason never took his job too seriously, and even with these new rumors, Mason says, "If I ever thought I wasn't the right person for the job, I'd be the first person to fire myself." In less gloomy times, Mason kept company culture fresh with videos like one of him dancing to Shania Twain's "That Don't Impress Me Much," and hiring a man to wear a tutu around the office. Just look at this press release for Groupon's third annual Grouponicus, the "ancient wintertime celebration full of great deals, super shopping tips and bags of sand."

But Mason also made it clear that Groupon wasn't his best idea. As he said in an interview with Time magazine, "To me, as somebody who likes to come up with ideas, it's kind of stupid; like, I've had way better ideas, way cooler ideas."

Many questioned his ability to lead a public company, and now the board of directors is said to be doing the same. How bad has Groupon done recently?

In the latest quarter, Groupon lost $3 million on $569 million in sales. In the comparable quarter last year, it lost $54 million on $430 million in sales. Operating income of $25 million improved over last year's third quarter of zilch, but down from previous quarters this year, which both reach over $40 million in operating income. The tamping down of marketing costs helps the company become more profitable, but as marketing costs decline, customer growth stalls. And if customers stop signing up, or fail to be repeat customers at this level of marketing, the future looks bleak for Groupon: 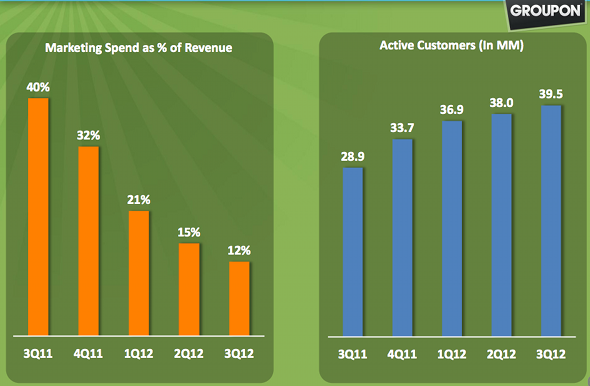 Mason may have done the best any CEO could given the industry's dynamics of low barriers to entry and high marketing expenses, but growth didn't meet investors' expectations, and the stock took its beating.

The (mostly) private counterpart
Amazon.com ( AMZN 2.80% ) owns 29% of LivingSocial, which gives us a small window into the company's performance. For example, in its latest earnings, Amazon took a $169 million loss for its stake in LivingSocial. This loss, according to a memo from LivingSocial's CEO, was for charges to goodwill. Meaning, the company paid more for past acquisitions than it ended up being worth.

And unfortunately, Groupon followed the same acquisition strategy for growth. This could mean future writedowns of Groupon's own goodwill, which sits around $250 million. And for its nearly $3 billion market cap, this would mean about 8% of the company's value.

The conclusion of the daily-deal experiment
Other companies dipped their toes into the daily-deal market, like Facebook ( FB 1.55% ), which tried it out for four months in 2011, Google ( GOOGL 2.87% ), which still runs its own Google Offers site and once offered about $6 billion to purchase Groupon, and eBay ( EBAY 1.76% ), which may have been four years late with its new local "eBay Lifestyle Deals." But these companies have plenty of other cash-generating businesses to support a small bet on the daily-deal business.

The success of daily deals as a concept was tested in real life. But like any experiment, the results could end up a number of ways, and it seems to be heading toward a conclusion. Daily deals sites could live on as clearinghouses for discounted merchandise, for one-off purchases of experiences that do little to generate repeat customers for participating businesses, and for discounts on laser hair removal. But as ways for local businesses to find customers, daily deals might be taken over by a new hyped-up solution.

As Andrew Mason noted in his letter in Groupon's IPO filing: "Expect us to make ambitious bets on our future that distract us from our current business. Some bets we'll get right, and others we'll get wrong, but we think it's the only way to continuously build disruptive products." Groupon could end up finding a completely new solution -- and while a new CEO might take the business more seriously, a replacement might not have the imagination of Mason.

Why Groupon Stock Was Falling on Tuesday

Why Groupon Stock Was Falling on Monday

Why Groupon Stock Slumped on Friday