Every investor can appreciate a stock that consistently beats the Street without getting ahead of its fundamentals and risking a meltdown. The best stocks offer sustainable market-beating gains, with improving financial metrics that support strong price growth. Let's take a look at what Xerox's (XRX) recent results tell us about its potential for future gains.

What the numbers tell you
The graphs you're about to see tell Xerox's story, and we'll be grading the quality of that story in several ways.

Growth is important on both top and bottom lines, and an improving profit margin is a great sign that a company's become more efficient over time. Since profits may not always reported at a steady rate, we'll also look at how much Xerox's free cash flow has grown in comparison to its net income.

A company that generates more earnings per share over time, regardless of the number of shares outstanding, is heading in the right direction. If Xerox's share price has kept pace with its earnings growth, that's another good sign that its stock can move higher.

Is Xerox managing its resources well? A company's return on equity should be improving, and its debt to equity ratio declining, if it's to earn our approval.

Healthy dividends are always welcome, so we'll also make sure that Xerox's dividend payouts are increasing, but at a level that can be sustained by its free cash flow.

By the numbers
Now, let's take a look at Xerox's key statistics: 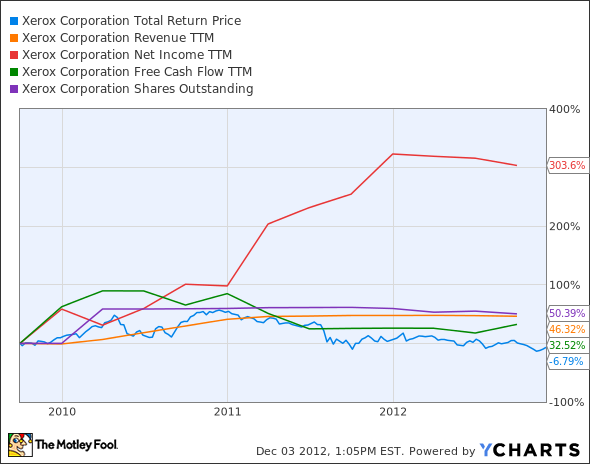 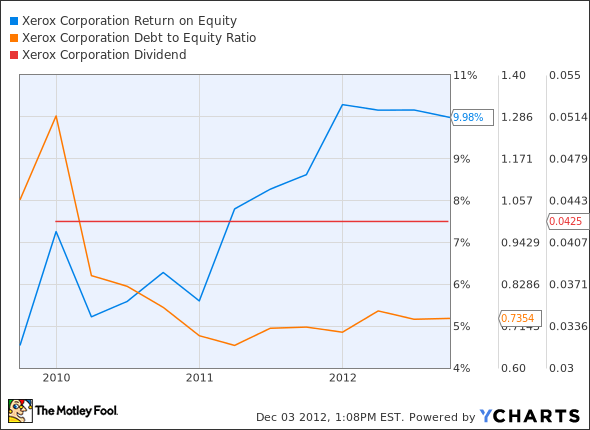 How we got here and where we're going
Xerox puts forth a very strong showing, missing out on a perfect score only because it hasn't boosted its dividend in the past three years, and because net income has shot past steadily rising free cash flow. However, investors haven't been keen on this onetime innovator. Its shares have fallen 17% in the past year, even as its bottom line has grown. Super-investor David Einhorn is backing away from the company as well, and the market has stood up and paid attention to his major moves lately -- when Einhorn laid out short cases against Green Mountain Coffee Roasters and Chipotle Mexican Grill, the reaction was swift and brutal. Can Xerox win the market's favor again, or are its best days long gone?

One of Xerox's problems is that the modern office may not need expensive copiers as much as it might have in years past. Office-supply retailers, which can serve as a bellwether for the broader business-focused products environment, have been in a multiyear swoon. During the same period that Xerox's stock has lost 7% of its value, sector leader Staples (SPLS) has lost almost half its value, as has Office Depot (ODP 0.36%). OfficeMax (NYSE: OMX) is down by 20%, and all three have suffered flat to declining revenue over the same time period. Xerox has done far better, but how much more long-term growth exists in its core markets?

One thing Xerox has going for it, besides financial growth beyond that of more broadly focused retailers, is consistent cash-flow strength. On the other hand, the company has a large pile of debt to chip away at, which is over 10 times as large as its current cash hoard. It's actually in a worse position on these metrics than Hewlett-Packard (HPQ 0.37%), a company that I've negatively compared to Xerox in the past. Both companies have tried to expand into the business-services industry, to somewhat mixed success, and both control large slices of commoditizing tech markets.

Xerox's dividend may be more defensible than HP's, as it's neither suffering from the internal turmoil that's undermined HP nor undergoing as extreme a competitive commoditization as HP. Its free cash flow payout ratio has barely budged in years, and is well below Staples', and far more sustainable than that of Pitney Bowes, another company defending a formerly lucrative niche. If a stock-price turnaround is in the offing, Xerox has more room to increase a stagnant dividend than many business-focused companies in order to maintain a reasonable yield. The question is, will Xerox raise its dividend, or is it content to keep more cash in its coffers?

Putting the pieces together
Today, Xerox has some of the qualities that make up a great stock, but no stock is truly perfect. Digging deeper can help you uncover the answers you need to make a great buy -- or to stay away from a stock that's going nowhere.