So far this year, the company has seen its share price drop almost 16%. While it looks like this young(ish) manufacturer has yet to start the engine, there are some small glimmers of hope that this company could finally rev up and start generating profits. Let's take a quick look at the ugly year that was and see whether this company has the potential to energize investors. 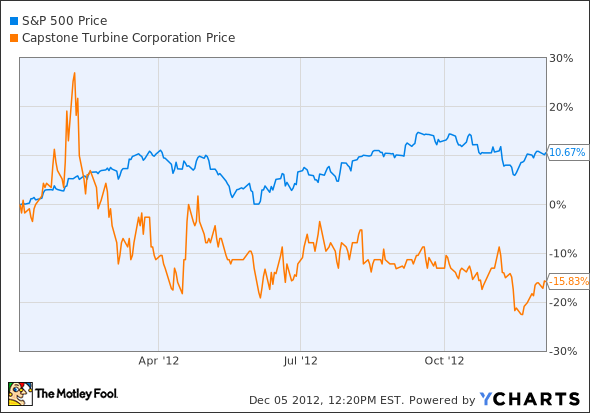 There's not much else to say when a company loses to the S&P 500 by 25 percentage points for the year. As each year goes by, the company seems to lose more and more. Overall, the company has declined by 7% over the past 10 years. Even the most patient investors would scoff at this kind of performance.

The (not as) bad
All across the income statements and the cash flow statements, we see a company with numbers all on the wrong side of good. If we look across the past four earnings releases, though, the numbers are trending in the right direction:

These last two may seem counterintuitive, but they could signal that Capstone is gaining a stronger financial position with its clients and suppliers.  These trends have held for more than six sequential quarters. So barring any major macroeconomic disasters, it's likely the company could keep this up.

The good
If there was anything good to discern from this past year, it appears that the company has a market for its products. Capstone has increased revenue by 86% over the past three years. It has also steadily grown its backlog (orders received but not yet filled). This past quarter, the order backlog hit a record high at $141.1 million, a 24% increase year over year. Much of its sales this year have come thanks to the boom in domestic energy production. Several energy exploration companies need to power their off-grid rig operations, and Capstone's micro-turbines are the perfect fit..

As a small consolation prize for investors, it has also gotten some of its manufacturing costs in control. This past quarter, gross margins improved by 2% year over year. Hopefully, Capstone can carry this momentum into 2013.

What a Fool believes
Below the surface of what many would consider a less-than-stellar investment, there lies the potential for something great. Capstone can manufacture more efficient turbines at smaller sizes than its major competitors GE (NYSE:GE), Caterpillar (NYSE:CAT), and United Technologies' (NYSE:RTX) Pratt & Whitney division.

Also, the company's turbines passed the Hurricane Sandy durability test with flying colors. On its most recent earnings conference call, Capstone CEO Darren Jamison said the company contacted more than 100 of its clients in Sandy's path; only one system failed during the storm -- thanks to being underwater. With so many people who relied on traditional power distribution systems left without electricity for weeks, the storm could quite possibly represent one of the best unintentional PR boosts for a company ever.

With so much more natural gas on our doorstep, it is very possible that decentralized power generation could become a much more commercially viable option for institutions -- and possibly individuals as well. If Capstone could get its act together, then maybe it and the industrial giants in this sector could bring the utilities business to its knees.

Investing in a company like Capstone takes a strong will and an extreme amount of patience, a rare quality among investors. If you're looking for something that has potential on a shorter time horizon, then you should check out The One Energy Stock You Must Own Before 2014. Our analysts at The Motley Fool believe this company is poised to reap big profits from cheap natural gas. For your own copy of this free report, click here.