If you invest in mortgage REITs, there's one metric you should get comfortable with.

It's known as the "constant prepayment rate" and can be found by searching the text of any mREIT's quarterly or annual financial filing -- to access these, go to the SEC's EDGAR database, enter the company name or ticker symbol, select the relevant filing (either the 10-Q or 10-K), and then do a textual search for the acronym "CPR."

This metric is important is because it measures the proportion of an mREIT's portfolio that's prepaid every year and must accordingly be replaced by new mortgages and/or mortgage-backed securities. It's particularly important in an environment of declining interest rates like the present, as every mortgage that's prepaid is replaced by one with a lower effective yield.

(As a side note, for the purposes of this article, when I refer to interest rates, I'm referring exclusively to the rates on mortgages and MBSes.)

With this in mind, the CPR can be used to forecast a particular mREIT's future interest rate spread relative to its peers. You can think of this in terms of a Punnett Square -- I apologize to anyone with bad memories from high school biology class. It should be no surprise, in turn, to see that mREITs with relatively low CPRs like ARMOUR Residential (NYSE:ARR) and American Capital Agency (NASDAQ:AGNC) have done significantly better over the last year than those with relatively high CPRs like Annaly Capital Management (NYSE:NLY) and CYS Investments (NYSE: CYS). As you can see below, the latter two currently sport significantly higher interest rate spreads than the former two.

And lest you think that shareholders are immune from the pernicious effects of a low CPR, here's how comparable investments in these five companies have performed this year. 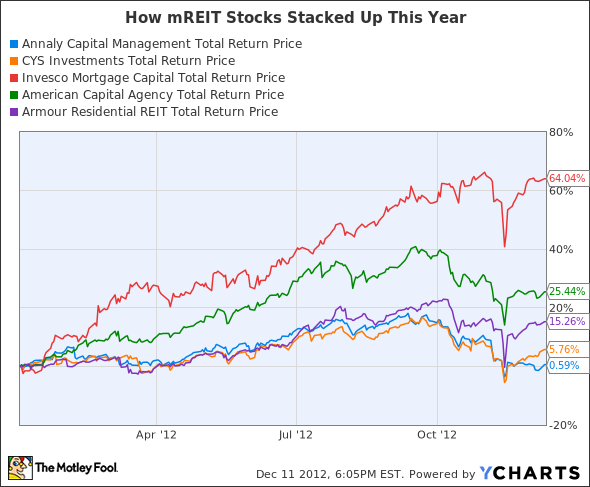 While far from perfect, you'd be excused for discerning a pattern here. Namely, mREITs with lower CPRs like ARMOUR and American Capital have handily outperformed those with higher CPRs like Annaly and CYS.

it's all coming together now
Given this, and to now focus on Annaly, it's probably clear why the mREIT pioneer has decided to acquire CXS Investments (NYSE: CXS), a higher-yielding commercial REIT that operates under the Annaly family of companies. What better way is there to increase your interest rate spread in the face of a high CPR and declining interest rates than to simply buy a higher yielding portfolio? None that I can think of.

But from the shareholders' perspective, there are two problems with this approach. First, the size of CXS' portfolio pales in comparison to Annaly's. As a result, the acquisition, while positive depending on the amount of goodwill that comes along with it, won't be inordinately accretive to Annaly's interest rate spread. And second, beyond the dividend, the benefit of investing in Annaly has always been its commitment to agency MBSes, which carry effectively no credit risk. CXS' portfolio isn't similarly insured.

With these factors in mind, as well as a host of economic issues that are beyond our current scope, investors would be well-advised to watch their investments in Annaly closely over the next year, as both the company's profitability and risk profile may look very different at the end of the next year as compared to today.