The energy market used to hang on every word from OPEC. A reduction or increase in production could send prices rising or falling in an instant. But, earlier this week, the oil-producing group announced that it would maintain production where it is, and almost no one cared. There weren't headlines on the evening news or endless analysis on cable television. It was a story that was over almost before it happened.

This begs the question: Is OPEC still relevant in the oil market?

It's not what it used to be
To say that OPEC doesn't matter would be silly. In fact, OPEC's production has grown faster than world production over the past 20 years. 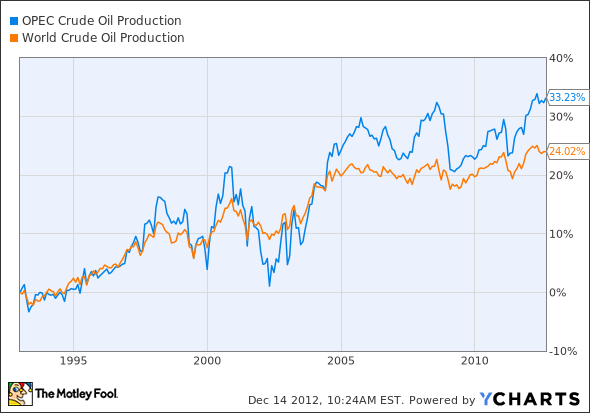 You could make the argument that OPEC's influence globally has grown and, considering the rise in prices over the past 20 years, the economic influence of OPEC has arguably grown.

The difference in the past few years is who is buying OPEC's oil and where these trends are headed. The chart below shows that while OPEC oil production has grown slightly over the past five years, the amount of oil produced in the U.S. and Canada has exploded. 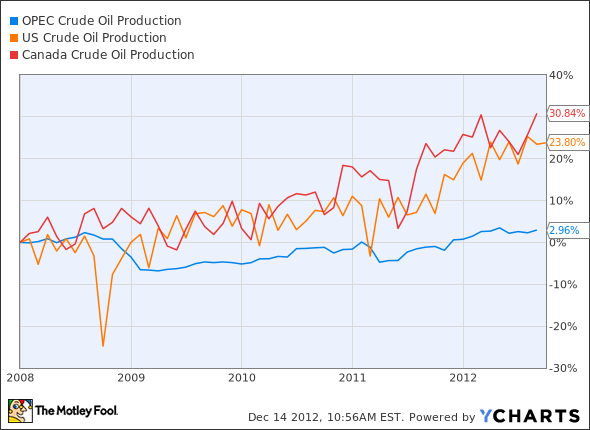 This chart may explain why traders don't react wildly to OPEC's statements anymore. It isn't the U.S., Canada, or even Europe who is heavily dependent on OPEC for oil these days. China is a growing customer of OPEC's oil; roiling the one customer that is growing isn't something OPEC is likely to do any time soon.

Impact on stocks
The impact of OPEC's waning importance in North America can be felt on the stock market as well, particularly by shipping stocks like Frontline (NYSE:FRO), Teekay (NYSE:TK), and Nordic American Tankers (NYSE:NAT). These oil shippers are being affected by a dramatically reduced need for foreign oil in the U.S. and Europe, and they are all bouncing near 52-week lows.

Right now there's no end in sight to the pressure on these stocks. With oil production up in non-OPEC countries the need for long-haul shippers is in a steep decline.

The trend will continue
The general trend of increased oil production in North America, and waning influence of OPEC here, is likely to continue. Companies like Continental Resources (NYSE:CLR), Whiting Petroleum (NYSE:WLL), and Kodiak Oil & Gas (NYSE: KOG) are still expanding production in the Bakken Shale play in North Dakota and Montana, the Saudi Arabia of North America.

As long as oil prices don't drop dramatically, the expansion of oil drilling and oil sands production will continue. OPEC will have less influence on oil traded in the U.S. and oil prices felt here at home.

Not forgotten, but in a pickle
With OPEC's place in context, I would say that OPEC isn't the power it once was... but it could be. If OPEC decided to drastically increase or decrease supply it could again have a major impact on global oil prices. But that's becoming less and less likely because of economic reasons within OPEC itself.

OPEC countries are reliant on the revenue that oil exports generate -- disrupting supply right now could be problematic. Increasing supply could lower prices and put pressure on shale producers, but budget pressures on many of these member countries requires that they maintain a steady profit from oil. It's not easy to double supply, but the price of oil easily could be cut in half if another 10 million barrels per day hit the market, for example.

Reducing supply also may have long-term consequences. If prices rise because of reduced supply, then the short-term profits may be higher but the expansion of drilling in shale and ultra-deepwater oil plays will only accelerate. In the long term this would reduce reliance on OPEC even further.

OPEC is in a tough spot. That's probably a big reason investors don't worry about its production decisions the way they once did. What is OPEC going to do?