2012 was another rough year for solar stocks. Overcapacity continued to dominate the industry, leading module prices to plunge, resulting in heavy losses. The pressure was too much for Q.Cells, Energy Conversion Devices, Abound Solar, and many other smaller companies. The companies still left standing saw their stocks fall even further after a beating in 2011, and there are questions about how many companies will survive 2013. 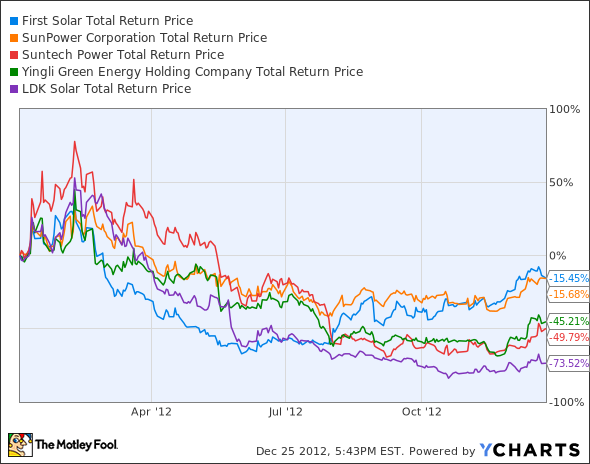 But while the future of many manufacturers comes into question, the future of solar as a long-term energy source is actually getting brighter by the day. Solar installations should grow slightly from last year at around 30 GW, but more sustainable markets are replacing subsidy-driven markets. Feed-in tariffs from Germany and Italy once dominated solar but now the U.S., India, Australia, China, and Japan are all growing markets for the industry. These countries have better solar resources than Europe and have more long-term, sustainable solar programs. This should bring more growth in these markets in 2013.

On the cost side, the progress is even more impressive. According to Greentech Media the blended average sale price of solar modules fell an astounding 43% from the third quarter of 2011 to the third quarter of this year. The overall cost to install residential solar fell 15.3% over the same time frame and utility scale solar fell 30.4%. That's progress that even solar bears have to be scared of.

Demand building worldwide
When we look at the solar landscape in 2013 the major trend that will continue is the growth of sustainable markets. The U.S. is expected to install about 3.2 GW of solar this year, which will grow to 4.0 GW in 2013, according to GTM Research estimates.

In Japan, a new feed-in tariff was set in July at over $0.50 per kW-hr, an incredibly high rate that brought 725 MW of non-residential solar and 1.3 GW of approvals in the first two months alone. The market may even overheat in 2013, but the long-term fundamentals of solar energy on the island country are still strong.

In India there's an economic need for solar. The country's growing economy is plagued by a lack of reliable energy and it imports natural gas and oil to fuel power plants. Since oil power plants are more costly than solar, solar power can not only be installed in more remote areas, it's more cost-effective. The country plans to install 20 GW of grid power solar and 2 GW of off-grid solar by 2020.

There are also a number of smaller markets from Latin America to Africa to U.S. military bases around the world that also will help grow solar installations in 2013. From the demand side it looks like a great year for solar.

Supply falling slowly
China's recent announcement that it would cut back subsidies to solar companies, promote mergers and acquisitions, and actually allow bankruptcies may finally make a meaningful dent in solar overcapacity in 2013. Companies like LDK Solar (NYSE: LDK), Yingli Green Energy (NYSE: YGE), and Suntech Power (NYSE: STP) are running with unsustainable debt levels, fueled by Chinese banks. This situation nurtured overcapacity to begin with, and in 2013 it looks like those subsidies will begin to fall.

The challenge for investors is that we don't know exactly who will be left standing in China and who may be left out in the cold. JinkoSolar's (NYSE:JKS) recent $1 billion loan agreement that will fund solar projects may help the company survive. Trina Solar (NYSE: TSL) and Canadian Solar (NASDAQ:CSIQ) have positive gross margins and balance sheets that may not make investors cringe at first glance. But even the best Chinese companies have flaws. In 2013, we may at least see some of the unsustainable capacity fall by the wayside.

Technology takes another leap forward
One big development that may ring the death knell on some Chinese polysilicon manufacturers is the next generation of GT Advanced Technologies (NASDAQ: GTAT) equipment.

The company will introduce new HiCz PV equipment in 2013 that will bring solar cell efficiencies above 22% on a mass scale. SunPower (NASDAQ:SPWR) is currently manufacturing at this level of efficiency but Chinese manufacturers are far behind the curve. 2013 is when the technology becomes available to take the next step forward.

The winners of this race may not be the usual players, though. China is cutting funding at a time when companies need to invest in the next generation of equipment. GTAT's management says that demand for new PV equipment is coming from Europe, the Middle East, and the U.S., not China. A paradigm shift in technology may be accompanied by some new names in solar.

This may have a negative effect on one of solar's only profitable companies -- First Solar (NASDAQ:FSLR). The company is still making one of the least efficient modules in the business, and 2013 will put more pressure on its main product.

Foolish bottom line
The maturation of the solar industry has been a painful process for investors (including myself) but 2013 will bring us closer to a more mature market. Some companies will fail, possibly even some very big names, but the industry will be stronger a year from now than it is today.

I think 2013 will be a year when a few companies separate from the solar pack. Someone will emerge from China, the question is who will it be... I think SunPower will emerge as a leader here in the U.S. High efficiency, a new utility-scale product called C7, and a backlog of large projects will give the company an advantage in both residential and utility-scale solar... and backing from Total doesn't hurt.