Coal is projected to grow the most of any energy source.

It's a long way from the coal country of Appalachia to the population centers of Asia, but in the years ahead there will be millions of tons of coal hauled over the 7,730 miles from Kentucky to India to meet the demand from the growing consumer class. With more than 1 billion people in emerging-market nations projected to join the global consumer class by 2025, there should be a bright future for coal companies. It certainly doesn't appear that way from the past year, however. 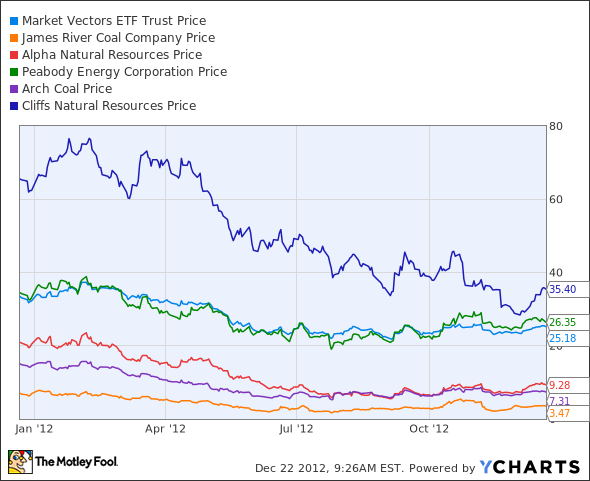 Advantages of coal
But coal has a myriad of advantages over other forms of energy that makes it the fuel of choice for the booming emerging-market consumer class, now and for the future. In a recent report by the global consulting firm McKinsey & Co., "Winning the $30 Trillion Decathlon," consumption by this group is estimated to reach $30 trillion annually, "the biggest growth opportunity in the history of capitalism."

This follows the recent trajectory for coal, as it has expanded the most in use of any form of energy since 2000. It now provides most of the electricity for the world (almost 80% of China's electricity comes from coal). Unlike oil and natural gas, it is widely available from a variety of sources.

In every way, it is easier to transport coal than oil or natural gas, as it's is less combustible, is cheaper to deliver, and doesn't require a vast pipeline infrastructure. Almost 40% of the world's people live in India and China, so this lack of critical infrastructure limits the utility of natural gas. Without a pipe running to their house, natural gas is of little use to a consumer or a business. Coal can be carried in a sack, if necessary.

Coal stocks ending 2012 with high hopes
In a reversal from the earlier part of the year, coal stocks have rallied recently. The fracking that has made natural gas so plentiful is coming under scrutiny from the Environmental Protection Agency (EPA), which could reduce its appeal and raise its price if output is limited. There was a court ruling last August that struck down an EPA rule that limited coal emissions from utilities, resulting in a coal industry jump in the stock market. The International Energy Agency just released a report stating that coal usage would increase more than any other fossil fuel over the next five years. As a result of these factors, for the last month James River Coal is up more than 40%, Cliff Natural Resources is up almost 13%, Arch Coal is trading higher by more than 12%, Market Vectors Coal has increased nearly 8%, and Peabody Energy has jumped more than 6%.

What a Fool should watch for the future
Growth in China and India is going to direct the price of coal, and the stocks in the industry. Foolish investors should ignore short-term jumps in prices resulting from court rulings, regulatory reports, and projections by analysts and focus on the long-term growth in major coal using nations around the world to decide which stock to buy.

For these objectives, Peabody is very appealing. Peabody is the world's largest private-sector coal company and a major exporter that should gain from growth broad. It has a 1.31% dividend that pays investors to wait. The payout ratio is only 11.64%, so there is ample cash flow for Peabody to raise the dividend.