Even though ARM's place in the value chain is unique, I've questioned the company's ability to effectively monetize its chip architecture designs, which led me to sell my own shares nearly a year ago. Since getting out, shares have continued to rally and are up nearly 60% in the past nine months, trading over $42 just last week. 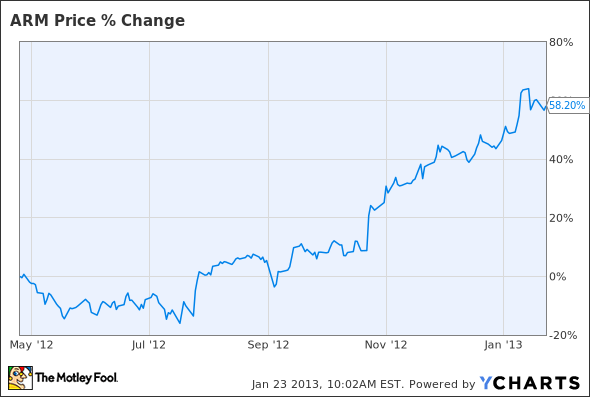 Has ARM gotten ahead of itself?

In fact, the only thing that knocked ARM back a couple dollars from that high was a downgrade form Morgan Stanley on valuation concerns. That wasn't the only analyst expressing concern, and other skeptics include Benchmark (to hold) and Bernstein Research (to underperform). As skeptical as I was last April about ARM, I'm even more doubtful now.

On one hand, royalty-bearing unit shipments continue to soar along with adoption of smartphones and tablets, although the average royalty rate per unit has been on a steady decline over the years. 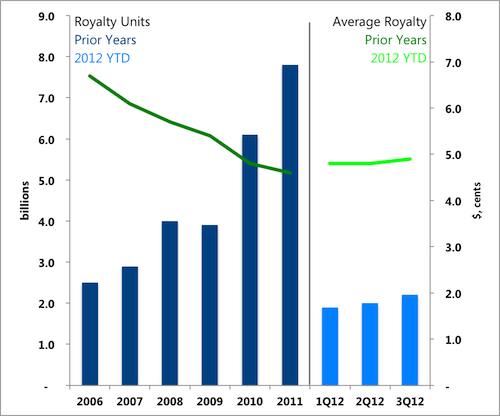 This chart is separated between prior years and ARM's 2012 results through the third quarter. The company is on track to increase royalty units again in 2012 if it can collect royalties on at least another 1.7 billion chips.

At the same time, shares now trade at nearly 80 times earnings and 21 times sales, yet revenue only grew by 18% last quarter.

Instead of investing in ARM, its licensees create more value within the chain and therefore garner more profits. That's precisely why I own shares of both Apple and Qualcomm, two of the few companies that license an architecture instruction set in order to create custom ARM-compatible processing cores (Swift and Krait, respectively).

ARM's monstrous run over the past year has it now priced to perfection, and in this case even its solid prospects don't quite justify the valuation. That's why I'm giving it an underperform CAPScall today.

Has ARM Holdings Gotten Ahead Of Itself? @themotleyfool #stocks $ARMH $AAPL $MS $QCOM Next Article
Current