Retail company Dollar General (NYSE:DG) announced today (link opens in PDF) that it plans to open 635 new stores and relocate 550 others in 2013. In line with this expansion, the corporation will add 6,000 new employees to its ranks, bringing the company's total job creation to 30,000 for the past six years.

"Dollar General's continued growth reflects our customers' increasing satisfaction with our everyday low prices and convenience," said Chairman and CEO Rick Dreiling. "Further, 2013 will mark another growth milestone as we plan to open the organization's 11,000 store before the year's end, when we will begin our 75th anniversary in 2014."

Dollar General's stock has risen 98% over the past five years as sales improved and net income skyrocketed more than 600%. 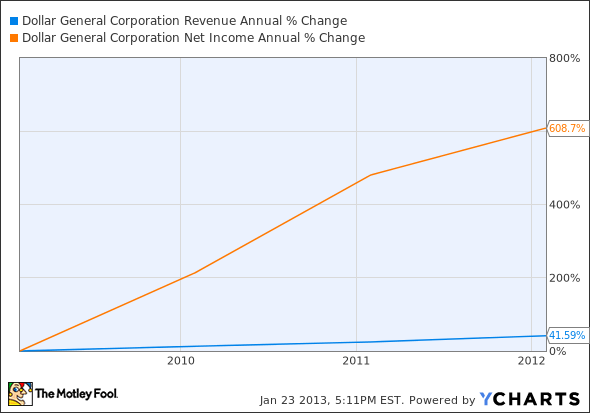