Chip maker NVIDIA (NASDAQ:NVDA) has had a tough time transitioning from being a graphics card specialist to being a major player in the mobile processor market. The company's Tegra line of mobile processors has shown much promise, but sales have been underwhelming in the past two years.

NVIDIA has had particular trouble gaining traction in the smartphone market. The dominance of Apple (NASDAQ:AAPL) and Samsung (each of which designs application processors in-house) has limited NVIDIA's addressable market. The recent trend toward integrated application/baseband processors, an area where Qualcomm (NASDAQ:QCOM) has a huge head start, has presented another roadblock for the company.

Nevertheless, NVIDIA has the technology necessary to become a major provider of mobile processors for the smartphone market. Moreover, CEO Jen-Hsun Huang appears committed to transforming NVIDIA into a mobile processor leader. The company is expected to bring its first integrated application/baseband processor (code-named "Grey") to market later this year. All in all, it is too early to count NVIDIA out in the smartphone wars.

The rise and fall of Tegra
NVIDIA's stock was severely battered during the recession in 2008-2009, and came under pressure again as the 2010 release of Apple's iPad created the specter of PC death. Many investors hoped that NVIDIA's Tegra 2 processor would be the company's savior, and the hype surrounding that product launch briefly drove the stock back over $25 in early 2011. Since then, as NVIDIA has had trouble making the Tegra business profitable, the stock has lost half its value (see chart below). 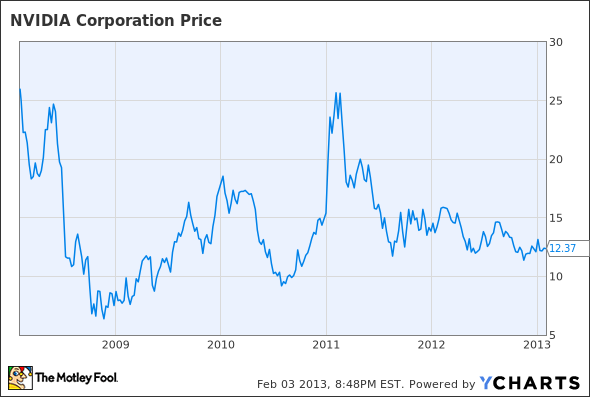 NVIDIA scored its biggest Tegra design win to date with Google's (NASDAQ:GOOGL) Nexus 7 $199 tablet. While formal sales numbers have not been announced, the sales pace had ramped to about 1 million units per month by last fall. Unfortunately, other high-profile Tegra design wins like Motorola's Xoom tablet and Atrix smartphone, as well as the Microsoft Surface RT, have sold poorly in the marketplace.

Overall, NVIDIA's performance in the tablet market has been satisfactory, and has been primarily held back by the failure of Android and Windows RT devices to break the iPad's dominance. However, the smartphone market is much larger, even if Apple and Samsung are excluded. Unfortunately, NVIDIA has always seemed to be a step behind market-leader Qualcomm in smartphones.

Integration: key to the smartphone market
During the past two years, the integration of the application processor and baseband processor on a single chip has become increasingly common (and important). Qualcomm has been the leader in this shift, and has emphasized the cost and power efficiency benefits of integrated processors, particularly for LTE-equipped phones. Integration tends to improve power management, which is essential for achieving acceptable battery life for heavily used smartphones.

NVIDIA is finally on the verge of bringing an integrated system on a chip to market (Grey) in order to compete with Qualcomm in this segment. In early 2011, NVIDIA purchased Icera, a company that was developing stand-alone baseband processors. The Icera acquisition provided the technology underlying Grey. However, NVIDIA did not acquire Icera with the intention of integrating Tegra processors with Icera modems, hence why the company fell so far behind Qualcomm. Shortly after NVIDIA announced the acquisition of Icera, CEO Jen-Hsun Huang stated, "With respect to the integration, we have no current plans to integrate their modem... [T]he ability to keep the two processors separate allows us to mix and match the best processors for the devices that we're in."

In 2011, NVIDIA guessed wrong on the evolution of the market. The efficiency benefits of integrated processors won out over the flexibility of stand-alone processors. However, the company has adapted and just introduced a stand-alone LTE modem (the Icera i500) last month. The integrated variant is not far behind. Once it is released, NVIDIA can begin chipping away at Qualcomm's lead.

Pursuing growth
While the smartphone market is reaching saturation in the developed world, emerging markets still provide a huge growth opportunity. Recent reports suggest that NVIDIA may be building "reference designs" for Tegra-powered Android smartphones and tablets. These designs would provide a template for local manufacturers in China and Russia to build Tegra-based products. This could accelerate the adoption of Tegra processors and Icera modems in the smartphone market.

While this is still an unconfirmed report, the idea makes sense. Smaller manufacturers with less to lose are more likely to take a chance on NVIDIA if they can thereby save on design costs. The rapid growth of the low-end smartphone segment gives NVIDIA a big opportunity to get Tegra and Icera shipments to critical mass without relying upon Apple or Samsung.

In other words, the market appears to be counting NVIDIA out of the smartphone wars. As an investor, you shouldn't. NVIDIA is finally bringing competitive products to market, and is targeting the rapidly growing market for sub-$200 smartphones in the developing world. Even moderate success will lead to handsome returns for shareholders.