Phillips 66's (NYSE:PSX) recent earnings release was another example of the fantastic run that oil refining and marketing companies have had these past several quarters. Looking past the numbers, though, there was one issue that the company sees as a potential weakness. For a solution, it looks to be turning to a new friend: Warren Buffett.

Hop on the oil train
Despite the large boom in U.S. oil production, a few parts of Phillips 66's refining operations have what may be considered a feedstock problem. Much of Phillips 66' byway facility in New Jersey has been cracking Brent crude, which is selling at a premium to almost every domestic crude supply. With WTI and Bakken crude spot prices at almost a $20 discount to Brent, these East Coast refiners could seriously improve their margins by moving to domestic feedstocks. The same could be said for West oast refineries as well, because Alaskan North Slope crudes are selling at prices very close to Brent.

One of the best feedstock candidates for these facilities is from the Bakken. Not only is the crude cheap in comparison with imports, but it's also a high-quality crude and doesn't have strong local refinery capacity. There is one small problem with Bakken feedtsocks, though: The infrastructure from the region to the East and West Coast is relatively weak.

Refiners, midstream, and E&P companies have settled on rail for emerging oil plays for the time being, because the speed to bring rail operations online using existing lines is much faster than building new pipeline networks. The two following images highlight how rail infrastructure is much more robust than pipeline networks in emerging oil regions such as North Dakota. 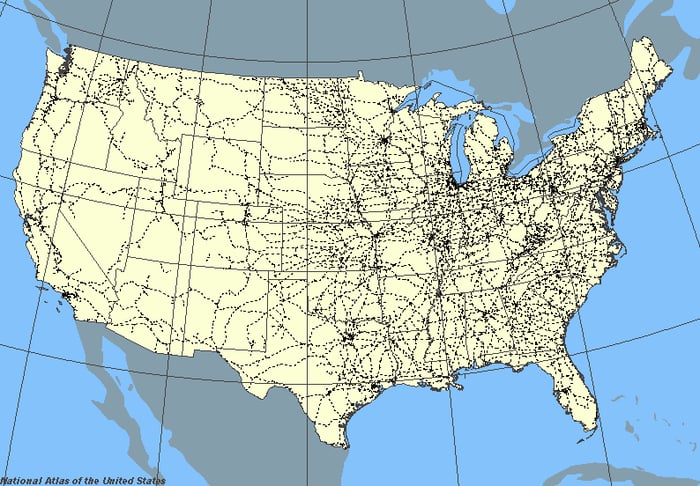 US Class I Rail Infrastructure (Source: US Department of Transportation.) 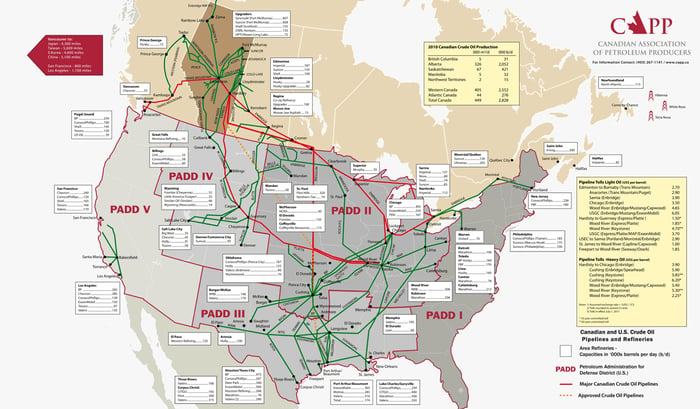 To take advantage of this, both Phillips 66 and Valero (NYSE:VLO)  announced in their recent conference calls that they plan to purchase 2,000 and 1,000 rail cars, respectively.  While much of Phillips 66's rail efforts will focus on moving Bakken crude, Valero plans to use rail to also move oil sands away from Alberta.

So where does Warren Buffett fit into this picture? The largest holder and operator of rail lines in the North Dakota region is Burlington Northern Santa Fe, which is a wholly owned subsidiary of Buffett's Berkshire Hathaway (NYSE:BRK-B). If any of these companies hopes to run rail cars in the region, they will need to use Burlington Northern's rail lines to make it happen. According to Berkshire's most recent quarterly earnings report, the largest revenue growth for the railroad company has come from increased petroleum shipments. As long as pipeline capacity remains weak in the region, Burlington Northern will see strong growth from petroleum transport.

Rail deliveries aren't the perfect solution, though. Based on Tesoro's (NYSE:ANDV) estimates, it takes about $8 to $9 dollars per barrel to move Bakken crude to its refineries on the West Coast. That's almost double what it takes to transport a barrel of crude via pipeline. It also requires these companies to either construct or expand their rail terminal facilities. Since rail is the only economically viable option right now, though, both refiners and E&P companies will be more than willing to pay the higher price.

What a Fool believes
Despite the higher costs associated with moving crude via rail, it certainly makes economic sense while spot differentials remain so high and pipeline networks have yet to catch up with production volumes. For the time being, East and West coast refiners such as Phillips 66, Tesoro, and Valero will all use rail as much as possible. While this will be a small gain for these refiners, Burlington Northern could be an even bigger winner. An uptick in rail deliveries could be a strong revenue boost for the company.

This advantage might be rather short-lived, though. Enbridge (NYSE:ENB) has plans to bring a 125,000 barrel-per-day pipeline online that will connect the Bakken with its existing network in the U.S. and Canada. Enbridge anticipates the pipeline to come online sometime in early 2013. Current production in the Bakken is about 500,000 barrels per day and is growing, so there is still a lot of takeaway capacity needed for the region. But it shouldn't be surprising if we see other midstream pipeline projects coming up.

Even though Burlington Northern is one of the largest rail companies in the United States, it's only one part of Berkshire's massive holdings. The entire Berkshire universe is complex and can be difficult to navigate. To help investors, the Fool's resident Berkshire Hathaway expert, Joe Magyer, has created this premium research report on the company. Inside you'll receive ongoing updates as key news hits, as well as reasons to both buy and sell the stock. Claim a copy by clicking here now.