Talk has been brewing over the past six months that Apple (NASDAQ:AAPL) may be taking aim at popular Internet radio streamer Pandora (NYSE:P). Recent clues found within the latest version of iOS hint that Apple's rumored Internet radio service may be imminent. Should Pandora be afraid?

The hints themselves seem minor, as 9to5Mac has discovered buttons within iOS 6.1 that appear to offer users the ability to buy a radio service, although Apple currently does not offer any type of radio service for purchase. Oddly enough, these tidbits were only discovered within the iPad and were not present within iPhones.

When considered alone, this revelation may not necessarily be indicative of any upcoming service. But when you consider that Bloomberg reported in October that Apple could potentially launch an Internet radio service within the "first three months of 2013" if it could ink licensing deals with content providers, then these little clues become more meaningful.

Apple has long-standing relationships with the major record labels thanks to the iTunes store, which launched in 2003. Steve Jobs once voiced his belief that users prefer to buy music instead of pay for streaming subscription services since monthly fees will eventually rise and owning music is a better long-term solution. However, Jobs has been wrong before, and Apple's been known to change its tune.

Pandora's service is undeniably popular, with the company continuing to see total listener hours delivered soar. Pandora served up nearly 3.6 billion listener hours in the third quarter, which was up from 2.2 billion listener hours a year prior. While I've always had doubts over Pandora's ability to monetize that engagement due to its licensing structure, that's still evidence that Internet streaming radio is popular among users.

iTunes revenue has continued to grow over the years as Apple expands its availability internationally, but growth has seemingly stalled. Last quarter, iTunes revenue came in at $2.1 billion, which was sequentially flat with the prior quarter. 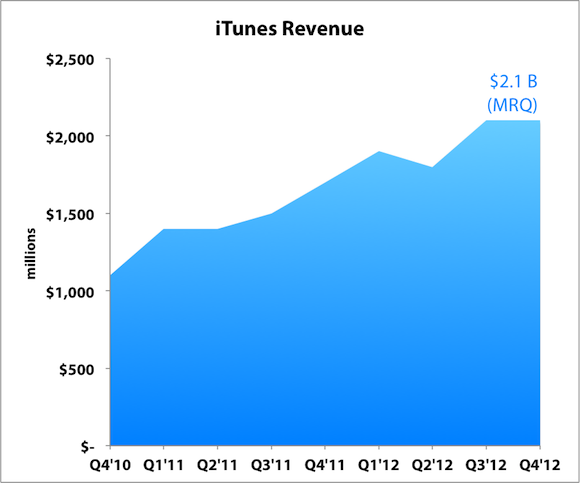 It's worth noting that Apple's iTunes results include sales from the App Store and iBookstore, so it's unclear how music sales specifically are faring. With the growing popularity of apps, it's entirely possible that app sales are driving the growth while traditional music purchases lag as users shift to streaming services like Pandora or Spotify.

iTunes has also never been a major profit driver for Apple. The company has always maintained that it operates its content stores slightly above breakeven, so I wouldn't expect an Apple radio service to be a meaningful contributor to revenue or earnings. Apple's content strategy has always revolved around providing complementary goods and services to strengthen its ecosystem and increase switching costs while generating real margins on products.

That's how an Apple Internet radio service would fit in.