A little over a month ago, I got an email from my youngest brother, asking me what steps he should take now that he's got money saved up to invest in the stock market.

My response, in short, was: Ease yourself in!

Read below to see why I offered up the advice I did, see what industry I think might prove troublesome for beginners, and check out what investments I think are worth starting with.

Historically speaking, the market is expensive

There are literally thousands of ways to try to tell whether or not stocks -- in general -- are expensive. Over the years, I've developed two that I think offer up nice data points.

The first is Robert Shiller's cyclically adjusted price-to-earnings ratio, or CAPE. Shiller, a professor of economics at Yale, is well known for calling both the dot-com and housing bubbles before they burst.

Using historical data that goes all the way back to 1881, Shiller has shown that the average inflation-adjusted CAPE for the market is about 16.5. In other words, stocks have traditionally traded hands for about 16.5 times their 10-year earnings average.

With a current CAPE of 23.15, one could argue that the stock market is overvalued by as much as 40%.

I've argued in the past that -- because of a shift in investor psychology from seeking dividends to seeking capital appreciation -- it is more useful to see what the average CAPE is starting in the 1950s. If we use that number, the market is overvalued by 18%, instead. Either way, it seems that stocks are expensive right now.

Investor sentiment
The other metric I like to peek at is the Sentiment Survey conducted by the American Association of Individual Investors, or AAII. Every week, the AAII asks independent investors if they feel bullish, bearish, or neutral about where the market will be headed over the next six months.

If we follow Warren Buffett's dictum to "be greedy when others are fearful, and fearful when others are greedy," then we should get worried when the bullish sentiment begins to rise. 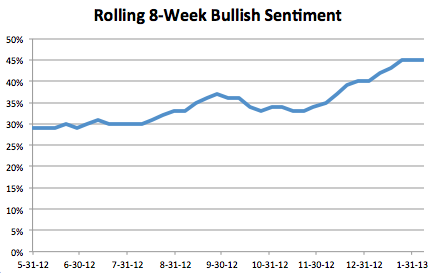 Though it hasn't reached the threshold of 49% yet, at 45%, investor sentiment is clearly creeping in that direction.

What to avoid
Taken together, these two data points tell me that the market seems to be a little expensive right now. What does that mean for long-term investors? Not much, actually, as we like to buy with the intention of holding for decades.

But it's one thing to want to be a long-term investor; it's another thing entirely to actually be one. It usually involves a consistent schedule of buying stocks and then not doing much with them for years. It takes time to develop that kind of temperament.

And so I'd warn investors to avoid putting too much money into any "hot stocks" right now. For instance, over the past year, anything involved with 3-D printing has boomed. Shares of 3D Systems (NYSE:DDD) and Stratasys (NASDAQ:SSYS), the leaders of this virtual duopoly, are up 357% and 165%, respectively, since the start of 2012.

While buying small "starter" positions would be a wise move, I fear that many beginning investors may be throwing large chunks of their portfolios into these companies. While I own and believe in them, I also know that there will likely be big price swings coming, and I'm prepared to hold my shares through these swings. Back in my beginning days, I'm not sure if I would have been so disciplined.

Just getting started
There are three very basic ways that a beginning investor can dip his or her toes into the investing waters safely. The first would be to simply buy a few shares of SPDR S&P 500 ETF (NYSEMKT:SPY), which mimics the movements of the S&P 500.

The second would be to invest a small portion of money in a large, solid, dividend-paying company that you are familiar with. I picked Johnson & Johnson (NYSE:JNJ) for my "World's Greatest Retirement Portfolio" for just that reason. You can read about the details here.

The final would be to devote a small amount toward a growth stock that some believe could be undervalued right now. My prime example is Chinese search engine Baidu (NASDAQ:BIDU). You can read about why I think investors are being stupid to bid shares of the company down here.

Notice that for all suggestions, I said to devote a "small" amount. That's because its best to ease yourself into this. If you've got over 30 years until you retire, you don't have to invest all that you have right now. Get to know your companies, plan out what you might need money for, and get comfortable with the investing process before swimming in the deep end.

A Warning to Beginning Investors: Ease Yourself Into This Market @themotleyfool #stocks $SPY $JNJ $DDD $BIDU $SSYS Next Article
Current