Why should you worry about OLED technology? Because it can make you rich.

OLED is short for organic light-emitting diodes. Sounds scary, right? Like a love child of health food and robotics. But OLED is simply a different way to emit light with high precision and record-breaking power efficiency. That's why Samsung has put its back into the technology, building a world-leading set of factories to make OLED-based smartphone and tablet screens.

This stuff has been around for a long time, just outside the mainstream of consumer awareness. Nokia (NYSE:NOK) was an early adopter, shipping OLED screens on the N85 smartphone, circa 2009. But even though Nokia was the world's biggest maker of handsets and smartphones at the time, there simply wasn't enough OLED manufacturing capacity to make the N85 a blockbuster. The lack of easy supply not only restricted Nokia's sames volume here, but also kept prices out of reach for many consumers.

The easiest way to keep track of OLED sales is by keeping an eye on Universal Display (NASDAQ:OLED). The publicly traded company researches OLED technologies and makes a living from the sale of licenses and materials to panel builders like Samsung. There are other companies in this field, but none with the exclusive OLED focus the Universal Display boasts. This revolution will move the needle much further and faster for a small-cap specialist than a global chemicals giant.

With that in mind, see if you can figure out what happened to this chart in 2010: 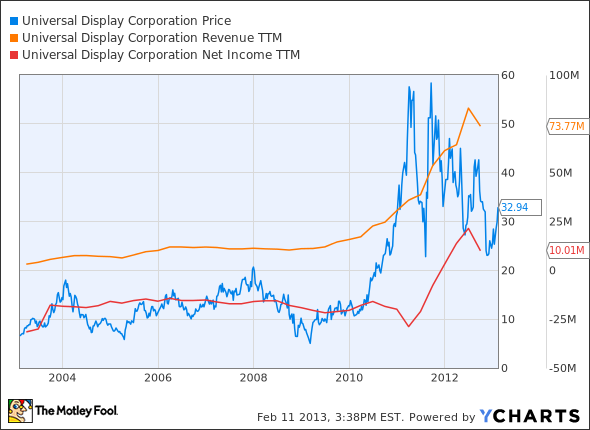 That's right: This was the year where regular people started getting their hands on real, live OLED products.

Where's the next big gain?
First, Google put its seal of approval on the technology when the Nexus One smartphone shipped. The OLED-equipped handset was never a big seller, but Big G's Android platform had found a feature to set it apart from other smartphones.

So should we expect the other shoe to drop in 2013? Not exactly.

Sure, Samsung and LG are building a new round of even bigger and better OLED factories. AU Optronics (OTC:AUO) is joining the party as well. This time, it's not just for tiny smartphone and tablet displays, but large-screen OLED TV sets are on the horizon as well. One 55-inch TV screen is the equivalent of about 100 5-inch smartphone displays, so Universal Display should see large royalty and material checks even with a modest unit volume in the early days.

Patience, young grasshopper
But most of this is scheduled to hit in 2014, not 2013. More specifically, LG and Samsung recently pushed back their big-screen manufacturing deployments into 2014. So there's another hockey-stick moment coming up, but probably not until next year.

That's all right. Patience is a virtue, and market timing is for suckers. As a Universal Display shareholder myself, I'm quite content to sit on my simmering shares until they finally reach the boiling point. Whether that happens in the back half of 2013 or sometime in 2014, it's best to be prepared today. Otherwise, you'll miss the big jump when it comes.