Earlier this week, mobile chip giant Qualcomm (NASDAQ:QCOM) was on the receiving end of some bullish sentiment from Bernstein Research analyst Stacy Rasgon. The company has been a major beneficiary of global smartphone adoption over the past few years, but Rasgon has taken note of a specific inflection point that has just occurred that bodes well for its future prospects.

China is now the world's largest smartphone market, so developments in the Middle Kingdom are something that smartphone players are keeping a watchful eye on. China has yet to move to 4G technologies, and is still in the middle of its transition to 3G. That has positive implications for both Qualcomm's chip businesses as well as its royalty business, since it has a licensing stranglehold on 3G.

Rasgon notes that between the three largest carriers -- China Mobile (NYSE:CHL), China Telecom (NYSE:CHA), and China Unicom (NYSE:CHU) -- the market hit an important inflection point in December where total 2G subscribers declined for the first time while 3G subscribers spiked. That's meaningful for the country's migration to 3G, as it's the first sign that 2G subscribers have topped out. 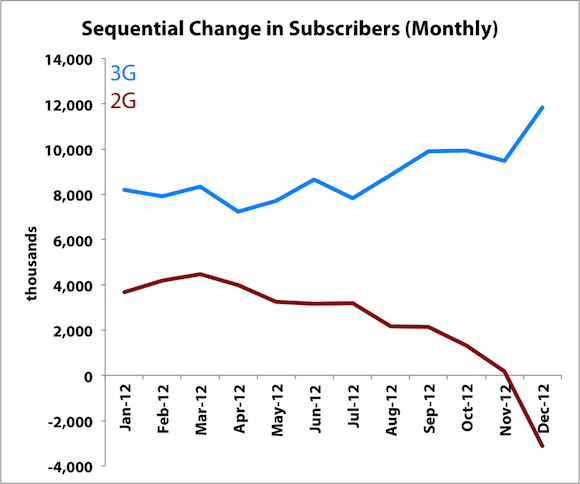 Looking at this chart, it's obvious that this point was inevitable as 2G subscriber additions have been steadily declining while 3G subscriber additions accelerated throughout 2012. Rasgon says that the overall trend is similar at all three carriers, but that China Mobile in particular has driven much of the transition over the past few months.

This may be due to two factors. First off, China Mobile's overall 3G penetration has lagged rivals, so it has more opportunities to grow its 3G subscriber base relative to China Unicom and China Telecom.

On top of that, the sheer size of its subscriber base means that changes in the composition will have a disproportionate effect on the broader market as well. China mobile lost 2.5 million 2G subscribers in December, much more than the 36,000 that China Unicom lost or the 620,000 that China Telecom lost. During the month, China Mobile added 5.5 million 3G users, topping China Unicom's 3.1 million net additions and China Telecom's 3.2 million net additions.

A big ramp
Qualcomm brings in less royalties from China Mobile's unique TD-SCDMA standard relative to traditional CDMA and WCDMA networks, but the company has also recently launched baseband chips that are compatible with TD-SCDMA.

Another contributing factor to broader 3G adoption is that Qualcomm has begun focusing on selling its smartphone reference designs, which make it easier and faster for OEMs to bring devices to market. Rasgon thinks that there was a strong correlation between these two developments, while acknowledging there may not be causality. Still, there's a high likelihood that Qualcomm's heavy promotion of its designs is having some positive impact.

Overall, the 3G ramp in China remains nascent, with only 23% of device sales in China supporting 3G. That's in line with the 21% estimate of 3G penetration of all subscribers that my data shows. As adoption continues to accelerate, Rasgon is modeling for Qualcomm to bring in an additional $2.4 billion to $5 billion in revenue from China by 2015.

While parts of the developed world are moving on to 4G LTE, nearly 80% of Qualcomm's baseband shipments are still older generations. Having the biggest smartphone market in the world continuing to transition to a standard where Qualcomm stands to profit is definitely a good thing.