Over the past three months, gold, as represented by the SPDR Gold Trust (NYSEMKT:GLD), has significantly outperformed silver, as represented by the iShares Silver Trust (NYSEMKT:SLV). During that period, the GLD is down only 8.4% as compared to the 14.8% that the SLV has slid. Let's look ahead to the potential impacts of the sequestration cuts that are scheduled to take effect on Friday. Are precious metals attractive at current levels and, if so, is silver or gold the better choice? 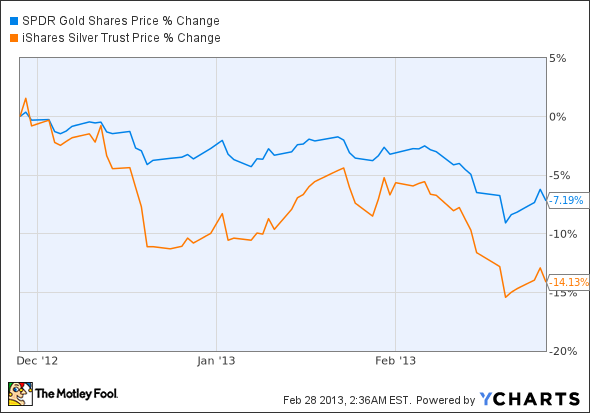 When you consider the message delivered to Congress this week by Federal Reserve Chairman Ben Bernanke, precious metals look primed to reverse their recent fall. Driven largely by the extensive industrial applications that exist for silver, the yellow metal comes in second place as an investment at current levels. You should keep in mind that the silver market tends to be more volatile. As a result, moves tend to be more violent. If your risk appetite can tolerate this heightened volatility, silver is the better choice now.

The current environment
Bernanke's testimony to Congress in the middle of the week allayed any fears that the Fed would change course and adopt an air of discipline. The Chairman staunchly defended the stimulus measures that are currently in effect.  Bernanke assured members of the House Financial Services Committee that his policies still are supported by the "significant majority"  of the FOMC. His remarks were enough to help the market rally during Wednesday's session, and deliver its best day since January.

With several significant events behind us, the most significant still lies ahead, as the countdown to the sequestration cuts continues unchecked. These automatic cuts are scheduled to go into effect on Friday if no action is taken. The Congressional Budget Office estimates that, while the measures will remove $1.4 trillion from the budget over the next decade, the cuts will likely cost 1.4 million Americans their jobs. Speculation remains high that if no action is taken, the shakeup that the sequester will cause is likely to trigger a severe recession.

The institutional view
Earlier this week, Goldman Sachs lowered its near-term price targets for gold in the three, six, and 12-month time frames. The firm believes that the commodity's 12-year run is running out of steam and is not likely to continue:

Our economists believe that the downside risks to their forecasts have diminished while the uncertainty about the size of QE3 is high. We believe that a shift has occurred over the past few months with conviction in holding gold waning quickly.

While Bernanke may have alleviated some of the QE3 uncertainty, it is unwise to completely ignore the voices of the dissenters that have been magnifying in recent months.

On the silver front, also earlier this week, HSBC upped its price targets for silver for both 2013 and 2014.  James Steel, the chief precious metals analyst for the firm, cited four reasons for the elevated price targets: increased institutional demand, strong investor demand in reaction to continued QE activity by the Fed, firming demand for jewelry, and consumer demand for physical coin and bar silver. The firm sees strengthening industrial demand as a significant driver of price, as large consumers begin to increase production of silver-intensive products.

My favorite play in silver remains Silver Wheaton (NYSE:WPM). The company's streaming model makes it immune to many of the production cost issues faced by pure miners like First Majestic (NYSE:AG) and Pan American Silver (NASDAQ:PAAS). As the miners have continued to report in recent earnings releases, production costs and environmental concerns continue to weigh on their operations. Silver Wheaton, with its industry-leading 800 million ounces of reserves, is mostly insulated from these concerns.

These competing views underline an important disconnect in the prices of the two metals: where gold will most typically trade as a safe-haven or wealth-store play, silver has a highly practical use that is frequently overlooked. As these demands intensify, the price of silver is likely to follow suit, regardless of the direction of gold. A spike in gold prices, contrary to the Goldman view, would also take silver higher.

Sequestration moves?
While there is certainly a high degree of probability that a last-minute deal will be struck in Washington, if the sequestration cuts are allowed to stand, you should expect gold and silver prices to spike. I say "allowed to stand" because, as the fiscal cliff taught us, Congress can backdate checks. If no deal is reached by the time the market opens on Monday, I would expect the moves to begin. Getting positioned ahead of all of this should be done with care, because a late deal could reverse these markets sharply. Over the medium-term, silver still looks like an attractive play and, at current levels, it is more attractive heading into sequestration.