On the first day of the "sequester" -- a bundle of indiscriminate cuts in government spending -- it's fitting that stocks would open lower, with the S&P 500 (SNPINDEX:^GSPC) and the narrower, price-weighted Dow Jones Industrial Average (DJINDICES:^DJI) down 0.29% and 0.25%, respectively, as of 10:15 a.m. EST.

The fiscal cliff is now
Here's the sequester by the numbers:

The impact on GDP growth is clearly a concern with regard to the broad economy, not to mention those workers who will lose their jobs temporarily or permanently as a result of the spending cuts. Six-tenths of  a percentage point is not insignificant in an economy that continues to struggle to fly on its own wings. However, the knock-on impact on the stock market is not clear. 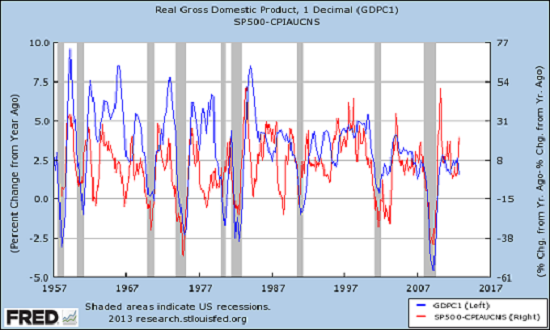 Note that while there is a clear correlation between stock returns and the growth rate in the economy during recessions, that coupling is much looser outside of those periods, with the two lines often diverging significantly and/or over lengthy periods. There is empirical evidence that stock prices have some value in terms of predicting recessions, but there's little reason to anticipate a recession at this stage (although it's not impossible to imagine). Certainly, the market's recent performance does not suggest a recession in the cards.

The sectors that are at greatest risk are those that are most sensitive to economic activity: energy, materials, and consumer discretionary. Were the sequester to be maintained as is, it could prove a headwind to stocks via a recalibration of earnings expectations. Current analyst estimates still call for a mind-boggling 15% growth in S&P 500 earnings per share in 2013. With costs wrung out of companies' operations, achieving that spectacular figure through top-line growth alone will prove increasingly difficult.