After spending most of the day in negative territory, stocks pulled out a win in the last part of the session,  with the S&P 500 (SNPINDEX:^GSPC) and the narrower, price-weighted Dow Jones Industrial Average (DJINDICES:^DJI) ultimately gaining 0.5% and 0.3%, respectively.

The VIX Index (VOLATILITYINDICES:^VIX), Wall Street's fear gauge, responded well,  falling 9% to close a hair above 14. (The VIX is calculated from S&P 500 option prices and reflects investor expectations for stock market volatility over the coming 30 days.)

What's going on with Apple?
It used to be that investors couldn't get enough of Apple (NASDAQ:AAPL). Now, the stock appears friendless. Today, for example, the shares lost 2.5% while the broad market advanced 0.5%. That decline produced a new 52-week low and put the company's market capitalization below $400 billion.

According to the folks at Business Insider, star bond fund manager Jeff Gundlach predicted last year that the stock would hit $425, so they went looking for a follow-up comment (the shares closed at $420.05 this afternoon). Here's how he responded:

AAPL over the last six months offers a textbook case study in market behavior and effectively debunks efficient market theories. The weakness is all the more remarkable because it has occurred within the context of a strong overall US stock market.  SPX up 5% since September 19, 2012 and AAPL down 40%. [Note: SPX refers to the S&P 500.]

Is Apple a counterexample to the efficient market hypothesis, according to which stocks are always fairly priced because they reflect all relevant information at any given time? I'm not sure, but I think it certainly points to herd behavior among investors that produces stock price momentum (positive or negative). Take a look at Apple's performance relative to the S&P 500 since the second quarter of 2012: 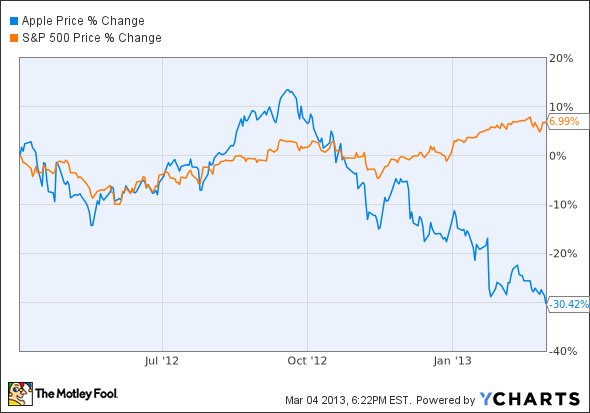 You can clearly see two periods of divergence between the two: The first as Apple shares shot ahead of the market, peaking above $700 on Sep. 19 and the second one, which is ongoing, during which the shares are underperforming. As far as herding goes, according to Goldman Sachs, the investment bank, Apple was the most heavily owned stock among hedge funds at the end of 2010 and 2011. That was not the case at the end of last year, as the stock fell to third place in Goldman's ranking behind AIG And Google. In other words, pile in as a group and leave together as well.

Momentum is a reality, but ask yourself: If you're a value-oriented investor, when are you most interested in looking at Apple shares: when they are above $700 and everyone is clamoring to own them or when they are no longer the flavor of the month and the price is knocked down?