Dying dividends and falling sales and negative earnings…oh, my.

Atlantic Power's (AT) shares plummeted 30% last week when the utility reported dismal earnings and slashed its dividend in half. With bargain bin prices, now might seem like the perfect time for a value grab, but the company's dreary quarter could be the first of many. Here's what you need to know.

Number crunching
There's no beating around the bush: Atlantic had an absolute mess of a quarter. On the top line, its $114 million in sales came up 27% short of analyst estimates, and 9.3% lower than Q4 2011's GAAP reported sales.

But falling sales were a common trend for utilities this quarter -- the real trouble comes from the company's bottom line. The utility reported GAAP EPS of -$0.50, a whopping $0.45 below Mr. Market's expectations and almost double the loss Atlantic reported for 2011's fourth quarter. This most recent news marks the sixth straight quarter that the utility has underwhelmed Wall Street.

Atlantic is tiny compared to many of its competitors, and its acquisition-based strategy  has pushed sales higher even as profit has plummeted. Revenue has rocketed 64% over the last five years, while net income fell into the red in 2009 and has dropped 180% in the same time period. 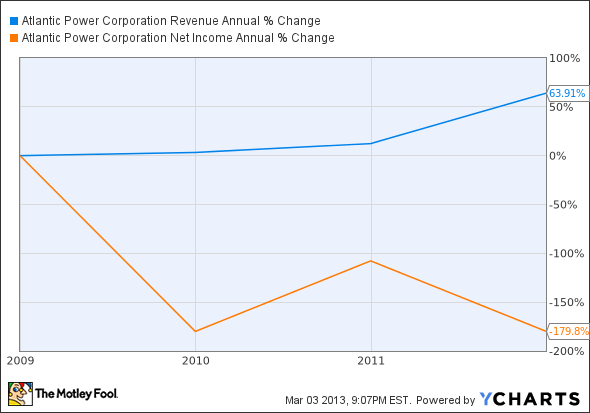 Atlantic has historically had one of the "best" dividend yields around, estimated at 10.2% before last week. But the utility's payout was highly unsustainable, and Atlantic just announced that it will slash its dividend 66% from Cdn$0.096 to Cdn$0.033 per month starting in March.

As energy overhauls put the squeeze on many companies' seemingly stalwart profits, dividends don't always offer investors the best bang for their bucks. Exelon (EXC 0.38%) also dropped its dividend 40% this past quarter to keep its books balanced and free up cash flow for capital expenditures.

In evaluating our financial position, cost of capital and updated financial projections, and how they fit with our growth strategy and ability to deliver attractive total return to shareholders, the board, supported by management's recommendation, determined that it was in the best interest of the company and its shareholders to establish a lower and more sustainable Payout Ratio that balances yield and growth and is at the same time consistent with our outlook for current and prospective projects under a range of scenarios. We believe a lower Payout Ratio will improve our financial flexibility in order to deliver on our objective of providing a combination of sustainable income and solid growth from accretive acquisitions, construction ready and development projects, which we believe will enhance shareholder value over time.

It makes sense. In a year where Atlantic felt the regulatory squeeze, increased its long-term debt, and more than doubled its liabilities, the utility should be doing more with investors' money than cramming it straight back into their open palms.

In the recent past and over the next few years, several utilities are undergoing massive modernization projects to ensure that they can offer more than just a dividend. Here's how Atlantic stacks up against a few competitors:

Atlantic takes the cake on capex -- and it should, considering its small-cap growth-by-acquisition strategy. Second prize goes to Duke Energy, which expects to spend around $12 billion to retire 6,800 MW of coal generation. Close on its heels, Southern will spend $16.5 billion in the next two years alone to kick its own coal habit, and recently became the first utility in more than 30 years to be approved to build new nuclear facilities. FirstEnergy expects to squeak by EPA regulations with around $1 billion in compliance-related costs, while Exelon's nuclear-centric generation gives it clean freedom from current costly upgrades. 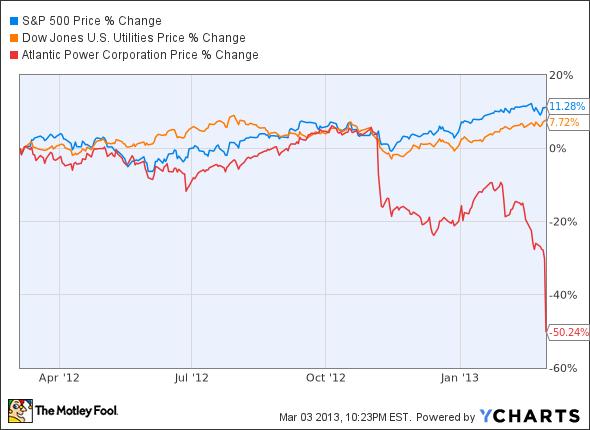 Over 30% of Atlantic's demise occurred in the last five days alone, and the company's current dividend yield has concurrently bumped up to a whopping 15.7% for the time being. But with above-average debt, lackluster margins, shrinking distributable cash flow, and an acquisition strategy that hasn't been working out, I'd think twice about pulling Atlantic stock out of the bargain bin.

Rain check
Now that it's done away with its disaster-sized dividend, I'll be watching Atlantic closely over the next year. If it renews crucial purchasing power agreements, if its recent renewable energy acquisitions pay off, if it pulls net income back into the black, and if its valuation remains reasonable throughout, I'll consider Atlantic's offerings again.

Fool contributor Justin Loiseau has no position in any stocks mentioned, but he does use electricity. You can follow him on Twitter, @TMFJLo, and on Motley Fool CAPS, @TMFJLo.

The Motley Fool recommends Exelon and Southern Company. Try any of our Foolish newsletter services free for 30 days. We Fools may not all hold the same opinions, but we all believe that considering a diverse range of insights makes us better investors. The Motley Fool has a disclosure policy.