Last Friday's jobs number was the best report since last November and second-best report in the past year. The 236,000 jobs added to our economy in February is a huge step in the right direction, though we do have a lot of work to do, as we're still about 3 million jobs short of our pre-recession highs. While the overall employment number was great, there's one number embedded in there that's even more important, and that's the number of construction jobs added.

While movie-goers will appreciate that Hollywood hired more than 20,000 last month, it was the 48,000 construction jobs added in February that's huge for the economy. That's the most construction jobs created since December 2007 and probably just the beginning of things to come.

According to Warren Buffett of Berkshire Hathaway: "We will come back big time on employment when residential construction comes back. You will be surprised, in my view, how fast employment changes when that happens." Buffett, as you know, is greedy when others are fearful, and he's been loading up the portfolio at Berkshire Hathaway to profit when housing does come back. He must have been smiling from ear-to-ear after seeing that jobs report knowing what'll come next.

According to a 2008 study by the National Association of Homebuilders, the estimated one-year impact of building 100 single-family homes in a typical metro area is 324 local jobs. In addition, the annual recurring impact from building those 100 single-family homes is 53 local jobs. So, not only do you have the direct one-time impact but housing creates a recurring employment market. It's this cycle of economic growth that's a powerful generator once it gets going.

That's why this number is so big for the economy. Its impact is far reaching, though right now it's most clearly seen in the numbers the homebuilders are reporting. As we've seen a steady improvement in the overall employment picture, homebuilder KB Home (NYSE:KBH) has seen the value of the homes in its backlog improve, with the average value up 35% over last year and at the highest levels since 2007. As the cycle shifts into high gear, its impact will be even greater.

Because of renewed confidence, KB Home is aggressively investing in new land as the company goes on offense. This confidence is for good reason, as it's seeing a pattern of increasing average selling prices on its homes, with the price accelerating last quarter. 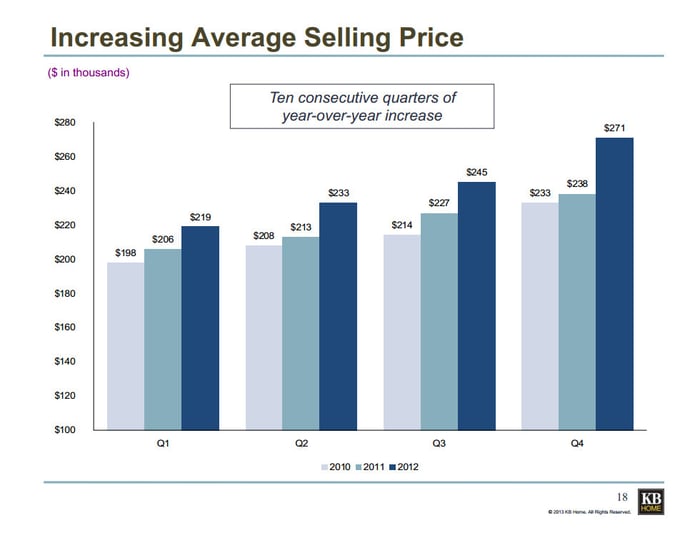 This is important, because as the company expands, it hires more direct employees, which then necessitates the need for additional indirect and induced jobs to support those employees. Not only is job creation likely to accelerate, but there is still huge upside as we slowly make our way back to long-term trend levels. Housing starts, while still low, have been accelerating and will probably continue to do so: 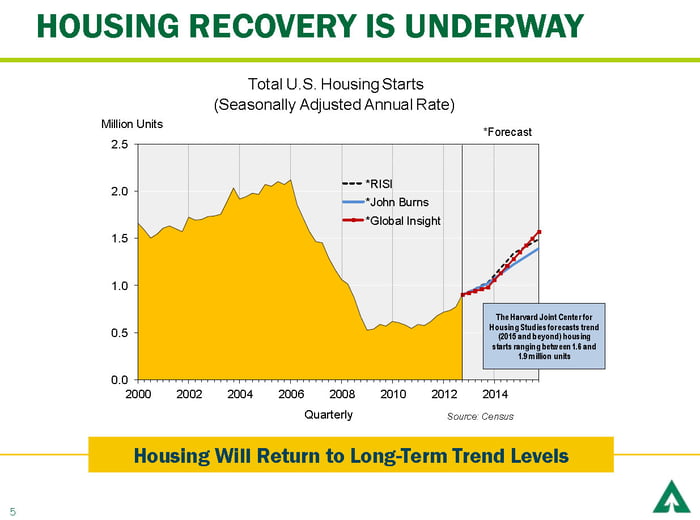 The impact is being felt far and wide, perhaps most immediately among suppliers such as Weyerhaeuser (NYSE:WY). As one of the nation's largest timber producers, the company sells one of the core materials needed for the construction of new homes. As construction begins to accelerate, the economic cycle is creating unique challenges that I see as a good sign. According to company CEO Daniel Fulton, "With this increased activity, we face challenges such as the availability and cost of skilled labor." While that creates additional near-term cost pressures for the company, it's a longer-term net positive for the millions of Americans currently unemployed or underemployed. The industry can begin to absorb some of them, while others find work through the indirect and induced jobs created along the way.

The impact to the economy and to investors will be far0reaching. One example is electric utility Exelon (NASDAQ:EXC), which has been struggling the past few years as electricity prices have remained below expectations, forcing the company to cut its dividend and hold back on growth projects. However, as more new homes are constructed and hooked up to the grid, that's going to increase demand for electricity and begin to shift the supply-and-demand balance in a more favorable direction for Exelon, especially given the company's low-cost nuclear capacity.

On the other end of the spectrum is the banking industry, with Buffett favorite Wells Fargo (NYSE:WFC) being among the top beneficiaries. Not only does the company have an extensive network spanning the nation, but it's also the leading mortgage originator and has the top mortgage servicing portfolio. As housing grows, so will the nation's top consumer0facing bank. Buffett has put his money where his mouth is here, as Wells Fargo, which has long been labeled as his favorite bank is now Berkshire Hathaway's largest holding, at more than $16 billion.

Make no mistake about it: The nearly 50,000 construction jobs we added last month is huge for housing and an even bigger indicator for the future of the economy as a whole. Jobs are being added up and down the economy, starting with the homebuilders and wood product manufacturers. That's good news for investors in companies that support the growth of housing, including Exelon, which will be keeping the lights on. Meanwhile, banks such as Wells Fargo will be originating and servicing an increasing number of mortgages to support all the homes being built. Again, to quote Buffett, "You will be surprised, in my view, how fast employment changes when that happens."