Last Thursday, the Federal Reserve announced the results from part one of its Comprehensive Capital Analysis and Review, known informally as the "stress tests." There were a few surprises overall, some good and some not so good. Unfortunately for Goldman Sachs (NYSE:GS) investors, their surprise was of the latter variety.

Just in case you missed the breaking Goldman news from last week, here's a quick recap: 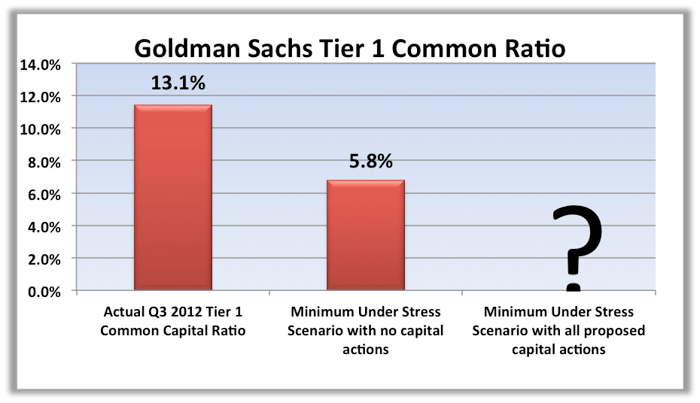 In the Fed's simulated, severe economic downturn, Goldman -- which had the strong capital position of 13.1% going into the stress test -- would lose a massive 7.3% off its Tier 1 common capital ratio, leaving it at 5.8%.

And 5.8% is without the implementation of any of Goldman's proposed capital actions: dividend increases or share buybacks. That information remains confidential until this Thursday, when the Fed releases those results to the investing public.

Can -- and should -- Goldman request a dividend increase or share buybacks?
The median Tier 1 common capital ratio performance for the banks this year was 7.7%. The minimum regulatory standard the Fed requires is 5%. Goldman's 5.8% is low, and it would immediately seem to preclude the possibility of any kind of shareholder-friendly capital actions, but that's not necessarily the case.

Last year -- the first year the Fed ran its Dodd-Frank mandated stress tests -- Goldman found itself in a similarly capital-depressed position but was able to increase its dividend. This was the first time it had done so since 2005.

So unless the results of this second round of the stress tests show Goldman taking another whopping hit to its Tier 1 common ratio, it's entirely conceivable the bank could ask and get permission for another dividend increase or share buyback plan.

And operating under the assumption that it can't hurt to ask (except for the excruciating public embarrassment if the Fed turns down said request), why shouldn't Goldman ask to return something to shareholders?

How much should Goldman ask for?
In terms of dividends, the Fed has already indicated it won't look kindly upon any increases that cause a bank to go beyond a 30% payout ratio. Goldman's payout ratio is currently 13%, so from the Fed's perspective, there's theoretically plenty of room for maneuver. But as with many things in life, sometimes the path of moderation is the road best traveled.

JPMorgan Chase (NYSE:JPM) and Wells Fargo (NYSE:WFC) both pay fairly generous quarterly dividends: 2.4% and 2.7% respectively. A number like that might be asking a bit much, both of itself and the Fed, but it could shoot for perhaps a nice, round 2%.