If America were to become energy independent -- whether because of new reserves being found, technological innovation that improves efficiency, or people simply cutting down on their consumption -- it would be a major change both for our way of life and how we relate to the rest of the world.

But saying that energy independence is as easy as one-two-three, and actually carrying that potential out, are two completely different things.

One of the key drivers to energy independence are the bountiful reserves of both oil and natural gas. These reserves were once inaccessible, but with modern-day fracking techniques, are now more or less open to development.

Take a look at how expansive these reserves are across the United States: 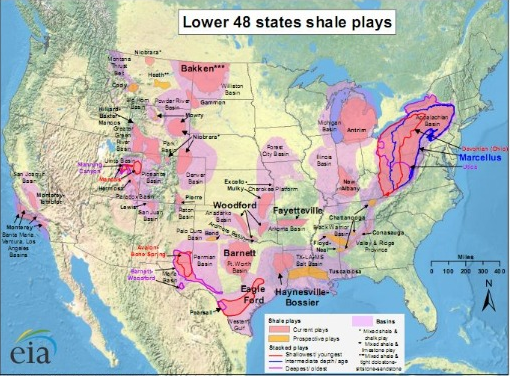 But these techniques are not without their drawbacks, especially due to environmental concerns that fracking damages local ecosystems, poisons underground water tables, and may even cause earthquakes.

While the nation's top pure plays on natural gas extraction -- namely Chesapeake Energy (OTC:CHKA.Q) and Anadarko (NYSE:APC) -- would lose profit due to tighter safety standards the government could impose on fracking, there exists a tiny company that could be sitting in the sweet spot between energy independence and environmental stewardship: Heckmann (NYSE:NESC).

Read below to see why I would say that, what the company's latest earnings release revealed, and at the end I'll offer up access to a special premium report on a major energy company.

Why such a sweet spot?

Earlier this year, I provided a primer on the precarious ground Heckmann occupies. The company has two main divisions: fluids management and recycling.

The fluids management division fulfills the needs of energy extractors, both natural gas companies -- like Chesapeake and Anadarko -- and oil companies. The fracking process itself requires copious amounts of water, and Heckmann has built out an infrastructure of pipelines and natural gas trucks to help meet these basic logistical needs.

The recycling division works to take both water that has oil or other pollutants in it, as well as water that's been used in the fracking process, and recycle that water so that it is once again useable.

As the debate rages on about the safety of fracking, I contend that Heckmann can have it both ways. If the energy companies have their way and fracking is deemed safe, Heckmann already has the infrastructure in place to meet the needs of the industry. If, on the other hand, there are significant safety and environmental requirements that are added to keep fracking legal -- but the demand for alternative energy remains strong -- Heckmann has an astronomical lead over other water treatment companies like Veolia Environmental (OTC:VEOEY), which is having its own problems navigating debt troubles.

And even though it already had a presence in this niche, Heckmann's purchase of Power Fuels -- a water treatment company with heavy exposure to the booming Bakken Shale in North Dakota -- puts it in the driver's seat for the meeting environmental standards the government may set forth.

What do the numbers say?
But most of what I've talked about so far is the story -- or the thesis -- behind investing in this company. Ideas are one thing, concrete facts are another, and judging by how the market reacted to Heckmann's earnings release, the facts are backing up the story. 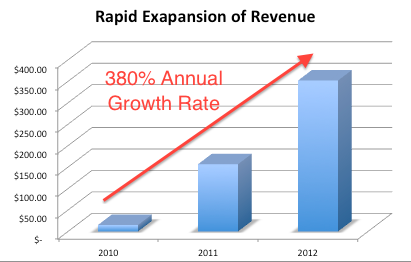 Looking at how the company's revenue has increased over the past three years, you can see why the market is excited. But its also important to note that some of the growth has been fueled by acquisition and heavy investment in capital expenditures. That helps explain why this is the first year that the company has turned a profit as a water services provider.

In the earnings release was this golden nugget from CFO Jay Parkinson: "We have hit an inflection point on capital expenditures – we have invested to build our network, and are now at the point where we can begin to leverage that investment, so our capital expenditures should be much lower going forward."

In other words, all that money that the company has been spending to build out its infrastructure is finally going to start to pay off. Spending is going to ramp down, and the infrastructure will begin to be used by energy companies.

How to play this
I've been a big fan of Heckmann for some time now, mostly because of its first-mover advantage in an increasingly important niche. That being said, I've only devoted about 2% of my overall portfolio to the company, as it's still in its more speculative, early stages of growth.

If you'd like to read up on a much bigger energy company that's been cleaning up its act lately, I suggest you check out our special premium report on Chesapeake Energy.

Could This Tiny Company Be in the Energy Sweet Spot? @themotleyfool #stocks $CHKA.Q $APC $VEOEY $NESC Next Article
Current