The 2000s were the decade of the low-cost carrier in the American airline industry. Southwest Airlines (NYSE:LUV) has been in business since 1971, but it was a niche player until the 1990s. In the past 10-15 years, Southwest has expanded rapidly, going from less than $5 billion of revenue in 1999 to more than $12 billion of revenue in 2010, and $17 billion in 2012. Meanwhile, new upstart JetBlue Airways (NASDAQ:JBLU) began service in 2000 and grew at an astonishing pace to become one of the top-six carriers in the country today, with annual revenue of $5 billion.

However, Southwest and JetBlue have hit some bumps in the past few years. The large network carriers have dramatically reduced their expenses as they have gone through the bankruptcy process during the past decade while adding fees for checked baggage and other services, boosting ancillary revenue. These developments have allowed the network carriers become quite competitive on price with Southwest and JetBlue for domestic flights. A recent study found that Southwest offered the lowest prices for a given route only 40% of the time. As a result of this more competitive fare environment, Southwest and JetBlue shares have dramatically lagged the industry benchmark over the past five years. 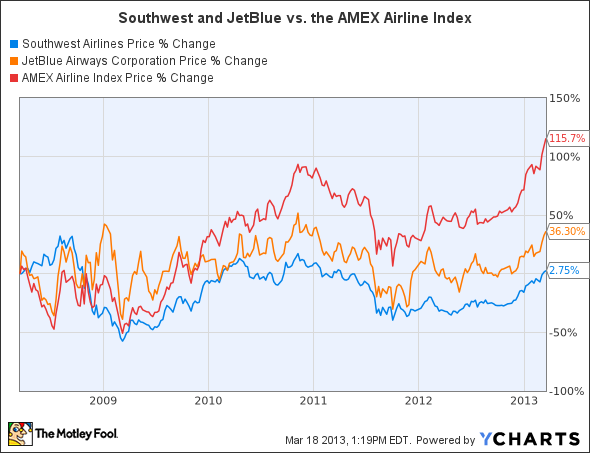 Beyond "low-cost"
As legacy carriers have closed the cost and price gap with Southwest and JetBlue, the term "low-cost carrier" has become somewhat of a misnomer. Indeed, Southwest and JetBlue have been ceding their leadership on price to a new group of so-called "ultra-low-cost carriers": principally Spirit Airlines (NYSE:SAVE), Allegiant Travel (NASDAQ:ALGT), and most recently, Frontier Airlines (a subsidiary of Republic Airways (NASDAQ: RJET)). The differences between LCCs and ULCCs can be seen most dramatically by comparing the seating on Airbus A320s used by JetBlue, Spirit, and Frontier. JetBlue offers best-in-class legroom by putting only 150 seats on an A320. By contrast, Frontier has 168 seats on its A320s, and is looking to expand that to 174. Spirit has pushed the envelope even further, with 178 seats on each A320.

Low prices are thus no longer distinctive features for Southwest and JetBlue. However, the two carriers do differ from competitors in that they provide benefits and amenities that cannot be found on most other U.S. airlines. To maintain their profitability in today's competitive environment, LCCs need to capitalize on this differentiation, and market themselves as "premium service" carriers. JetBlue has embraced this ideal, and emphasizes its premium amenities heavily in its marketing. By contrast, Southwest has had more trouble distinguishing itself from other carriers now that it is no longer a clear price leader. This messaging problem could continue to drag down Southwest's performance if it does not clarify what it stands for.

Focus on customer service
Low prices historically helped attract customers to Southwest and JetBlue. They kept costs down by using just one or two aircraft types, offering a single class of service (no business class or first class), and ensuring high aircraft and labor productivity. Moreover, they were able to convert these customers into loyal followers by providing top-notch customer service at a time when legacy carriers were particularly unreliable.

Today, the focus on customer service at Southwest and JetBlue is the distinguishing feature of these companies, not low prices. While virtually every other U.S. carrier charges for checked bags, JetBlue will still check a bag for free, and Southwest offers two free checked bags. Southwest is unique in having no flight change fees, while JetBlue offers far more legroom than any other carrier, as well as free satellite TV and satellite radio at every seat.

These customer-friendly policies come at a cost. Offering more leg room means putting fewer seats on each airplane, thus reducing the number of tickets that can be sold. Allowing free itinerary changes makes it harder to predict how many ticket holders will actually show up for a given flight. Providing free TV and satellite radio at every seat is costly. Lastly, allowing customers to check bags for free means giving up a potentially significant stream of ancillary revenue.

Monetizing the premium experience
Offering premium amenities should theoretically create pricing power. However, JetBlue has been better at monetizing its "premium" atmosphere than Southwest. Customers are willing to pay a little extra for more space and better entertainment options. By contrast, Southwest still leads with "low fares" when describing the Southwest experience, and it promotes its policies of no bag fees and no flight change fees. However, Southwest's messaging does not give customers a good reason to fly Southwest if they can find lower fares somewhere else.

Southwest's meager 2.5% profit margin last year shows that the additional costs imposed by its no-fee policies are not producing commensurate revenue benefits. Thus, Southwest should consider rebranding itself to put more emphasis on high-quality service; it should also consider adding premium amenities, such as complementary in-flight Wi-Fi. (Alternatively, Southwest could drop prices to reinvigorate its "low-cost" image, while introducing bag fees and flight change fees to offset the lost revenue.) JetBlue has been able to grow profitably even as its prices have approached those of competitors because it offers premium amenities that can attract customers who aren't as concerned with price. Southwest probably cannot regain its status as the lowest-cost airline, and so management should aim to reinvigorate the business by moving toward a "premium service" model as well.