So you're a young investor who's paid off your debt. You’ve set up your emergency fund, and you're maxing out your retirement contributions through your 401(k) and IRA.

But now you want a bigger return. You're looking to buy and hold, and you're not sure where to start. While you might be tempted to find the next "hot" biotech company, there's a more surefire way to secure an early, secure retirement.

Here are five stock ideas that could help you get tehre.

With a market cap of more than $250 billion, Berkshire Hathaway may scare young investors who think the company can't grow as quickly as it did in the past. What's more, Buffett is 82, and, understandably, he won't be at the helm to beat the market forever.

However, much of the company's value comes from the business it owns outright, such as See's Candis. And the portfolio of big-brand enduring businesses -- in conjunction with long-term investments in stalwarts such as Coca-Cola -- that Buffett has compiled over the years has beaten the S&P 500 composite index over the long term. That may continue to for some time.

2. Invest in and learn from what may become the best: Markel
Markel (NYSE:MKL) is similar to Berkshire Hathaway in that the company has an insurance business and uses much of the capital it generates to buy other, unrelated companies. But Markel is smaller. It has a market cap of just under $5 billion, which means it can move into smaller companies with potentially better returns than a behemoth like Berkshire can invest in.

Despite the 2008 downturn, Markel's stock has returned around 130% over the past 10 years. For comparison, the S&P returned only 74%

Though the company trades at only a slight discount to Berkshire's price-to-book multiple, Markel investors will also get Chief Investment Officer Thomas Gayner -- and he's only 51 years old. That means young investors could see continued, market-beating performance for decades to come.

3. Invest in what you know: Starbucks
Given America's love of coffee, I can think of no better investment than the company that has become synonymous with the dark, caffeinated drink: Starbucks (NASDAQ:SBUX).

Riskier than the first two ideas, Starbucks is still probably less risky than the latest "it" company your best friend told you about -- if only because you're a coffee drinker and can differentiate the delicious from the mediocre. And that's the point. You understand the product. The best investors invest in what they know, what they have a "circle of competence" in.

That being said, Starbucks isn't cheap. Currently, the company trades at a P/E of more than 30. However, enterprising investors should focus on the company's expansion into China, and the domestic revamp of its Seattle's Best Brand through partnerships with Burger King Worldwide and experiments with drive-through coffee stores.

4. Invest in what you know, but what's out of favor: Chipotle
What's better than a delicious company with fantastic growth prospects? One that's trading well off its 52-week highs.

Down more than 22% over the past year, Chipotle (NYSE:CMG) has investors worried that the company can't continue to grow its sales as fast as it has in the past.

Yet even as the company commands about 1,400 burrito grills, Chipotle has been able to increase revenue by at least 20% every year except the recession-plagued 2009.

Moreover, the company's ShopHouse concept is gaining traction and could be a key driver for future growth. At its only location in D.C., the Southeast Asian restaurant concept is so popular that the company plans to open two more.

5. Invest in what you know, but is painfully boring: Clorox
Now, Clorox (NYSE:CLX) may not be the first investment you may think of when searching for market-beating returns. But the company that's synonymous with bleach made our list of painfully boring stocks with great returns: 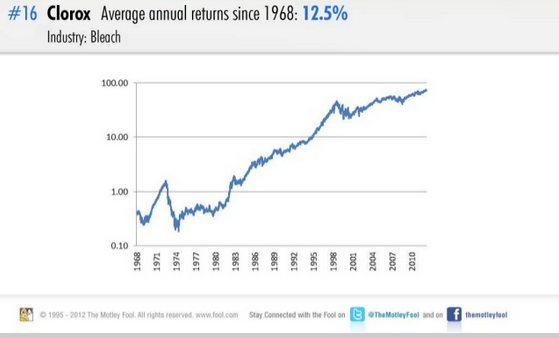 Past returns are never a predictor for future returns, but it's probably a good bet that the next time you look to whiten clothes, you'll first think of bleach, and then you'll think of Clorox.

Get smart with your moneyu
Stock-picking doesn’t have to be a gamble. By following the best and investing in what you already know, you can make smart investments now that'll pay in the long term -- and put you in position to sit on a beach somewhere a few years early.