The stock market climbed on Friday to finish the week on a positive note, with both the S&P 500 and the Dow Jones Industrial Average ending marginally higher.

Below the surface of an otherwise placid day in the market, however, were a number of countervailing currents sending shares of Chipotle Mexican Grill (CMG -0.04%) meaningfully higher while Wells Fargo (WFC 1.92%) saw its stock suffer.

Chipotle Mexican Grill, which has been struggling to regain its footing in the wake of multiple food-borne-illness outbreaks at its locations over the past two years, saw its shares climb more than 3% on Friday.

The move came after Facebook (META -0.76%) said the burrito maker will be included in the social network's food-ordering program. The service, a partnership with Delivery.com and Slice, allows Facebook users to place orders from restaurants straight from the Facebook app. The service itself isn't new. What is new is that members of the social network can now place orders using an "Order Food" feature that aggregates on a single page all of the restaurants that participate in the program. Previously, Facebook users had to go a restaurant's individual page to place an order.

It was a rare bit of positive news for Chipotle, which has seen its stock lose more than half its value since 2015. The company has been desperately trying to regain the trust and loyalty of customers since then, rolling out new products such as queso dip and chorizo to entice them back in. Yet its efforts have largely fallen flat to date, with Chipotle's same-store-sales growth continuing to lag its historical performance. 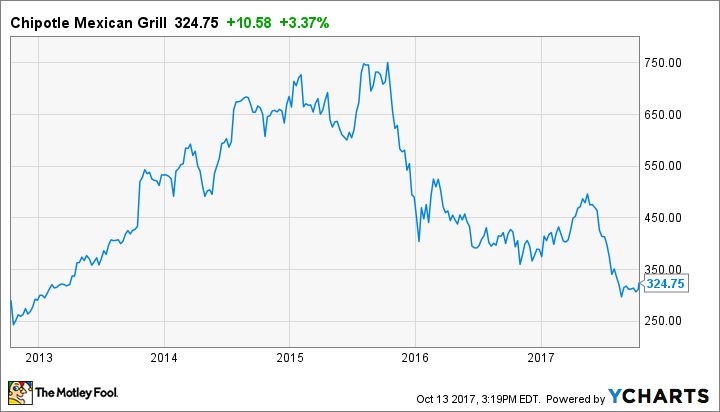 Shares of Wells Fargo went in the opposite direction of Chipotle's on Friday, dropping after the bank reported disappointing third-quarter earnings. All told, Wells Fargo earned $4.6 billion in the three months ended Sept. 30, representing a steep fall from the $5.6 billion it earned in the same quarter last year.

Much of the decline can be traced to a $1 billion charge Wells Fargo incurred to cover anticipated legal costs stemming from pre-crisis mortgage-related regulatory investigations. Once this charge is backed out, Wells Fargo's earnings per share came in at $1.03, which was flat with last year. Like Chipotle, Wells Fargo has also been struggling to regain its footing, after regulators revealed in September 2016 that employees in the bank's branches had spent years opening accounts for customers without the customers' authorization to do so. All told, the bank opened an estimated 3.5 million illicit accounts between 2009 and this year.

The incident has wreaked havoc on Wells Fargo's once-industry-leading returns and efficiency. Revenue is being weighed down by a shift in the bank's culture away from sales quotas, while expenses have been elevated to absorb the legal and administrative costs of dealing with the fallout.

It remains to be seen whether Wells Fargo can once again become a leading brand name in the United States, but it seems fair to say in the wake of the bank's third-quarter performance that investors shouldn't expect it to happen anytime soon.