Here's what five Fools are buying while the market is down.

The market's performance has been pretty awful so far in 2016, with the S&P 500 down about 7% since the first of the year. While many people are panicking as a result of the turbulence, we like to think the market is "on sale", and therefore it's time to go shopping. We asked five of our contributors to tell us what stocks they're buying, and here's what they had to say.

Brian Feroldi: Gilead Sciences (NASDAQ: GILD) is a stock that gets no respect. Despite having an excellent management team, a pipeline packed with potential, and a history of exceeding expectations, Gilead Sciences is a cheap stock that just keeps getting cheaper. Fears of incoming competition from Merck's new Hepatitis C treatment -- which just recently won approval -- has analyst worried that sales of its all important Hepatitis C franchise will stall.  While it's possible that Merck's new drug could throw a wrench its growth plans it's important to remember that Hepatitis C is a huge market and its big enough to support multiple winning drugs. There are 4 million patients in the US alone that need treatment and so far less than 10% of them have been cured. If you zoom out a bit further to include the entire world the pie grows to 180 million people, so the opportunity remains huge, even with additional competition.

Even if Hepatitis C sales do come under pressure Gilead has a huge pipeline that could help it stem any potential declines. The company currently is currently running 26 clinical programs that will help it either expand its leadership positive in markets it already competes in or expand its presence into new disease states. The company has set it sights on the hematology/oncology and inflammation/respiratory markets as future growth opportunities and if all goes well then it will diversify away its revenue dependence on the HIV and Hepatitis C markets.

The market doesn't believe that Gilead stands a chance as shares are now trading for less than 8 times earnings, and after accounting for its recent dividend bump of 10%, its shares now yield around 2.2%. I think those numbers more than compensate for the risks involved with investing in Gilead Sciences, so this is a stock that I am happy to buy again.

Selena Maranjian: Textainer Group Holdings Limited (TGH 0.98%) is a stock I recently sold that I'm thinking of buying again. Why did I sell? Well, because it had fallen significantly and I harvested the tax loss to offset some capital gains. (Shares have plunged close to 70% over the past year.) I still believe the company stands a good chance of performing well in the future, though, so it's back on my to-buy list.

Textainer Group Holdings Limited is a giant in an industry you have probably never even thought about -- shipping containers, those big metal boxes that are stacked on massive ships, crossing the oceans carrying various cargo. In fact, it's the world's largest lessor of containers. It does have competition, though, and more of it in recent years, as low interest rates and low steel prices have permitted it and its peers to beef up their fleets, leading to ample supply in the global market -- and thus, relatively low prices.

That's not a permanent situation, though. Interest rates, for example, have begun to rise. And Textainer has many strengths to keep it afloat and growing. It has strong customer relationships, for example, serving the world's top 20 shipping lines, with its top 20 customers having leased from it for an average of 24 years. (About 76% of its leases are long-term ones, lending stability to revenue.) The company sees long-term demand for containers growing, especially for refrigerated ones ("reefers"), as developing economies boost their demand for imports. Even now, it's busy, with a fleet utilization rate topping 95%.

Oh, and by the way -- Textainer has paid dividends for 25 consecutive years, and its dividend recently yielded a fat 9%. The company reports its fourth-quarter results on February 11, so if you're interested in it, stay tuned.

Matt Frankel: One stock I've bought several times since oil prices collapsed is National Oilwell Varco (NOV 2.83%). The current share price is so good, having dropped by more than 45% in the past year, I may end up buying even more. 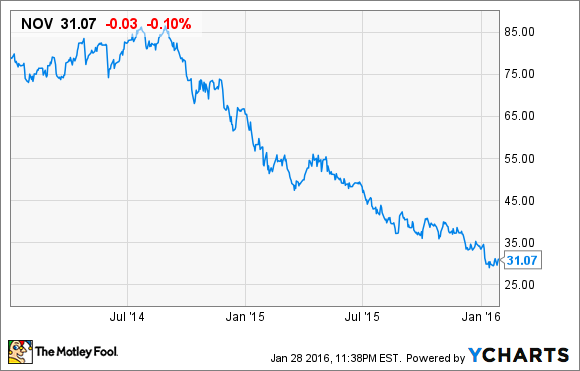 The company has remained profitable despite the headwinds, and has a low debt-to-equity ratio of just 22%. In a nutshell, National Oilwell Varco's dominant market share and rock-solid financial position will allow it to survive depressed oil prices for as long as they last. In the meantime, I'm happy to collect a juicy 6% dividend yield while I wait for the rebound.

Jason Hall: Fears of a global economic slowdown have sent shares of MasterCard (MA -0.51%) down more than 10% from their peak in November. After all, the company does a lot of business outside the U.S. already, but international growth is expected to power the company for years to come. On the surface, that may sound like a bad combination, especially when factoring in a strong U.S. dollar, which further dilutes the value of the company's overseas income.

The current global economic uncertainty very well could turn into recession, but economic cycles happen, and this quarter's -- or year's -- downturn reaches bottom, and another upswing starts. But at the same time, the global population continues to grow, and technology continues to become more pervasive.

As prevalent as plastic seems in developed countries, electronic payments still make up less than 20% of global transactions. At the same time, the global middle class is expected to increase by around 1 billion people by 2030. Between this expansion of the global middle class and the increased use of mobile devices in developing markets, the percentage of transactions that will move from cash to electronic is enormous. And MasterCard's payment network will be one of the key things that supports that shift.

That's why I own MasterCard, why I plan to buy more, and why I'll probably hold those shares for many years to come.

Dan Caplinger: Mexican fast-casual chain giant Chipotle Mexican Grill (CMG 0.20%) has been in the news in recent months for all the wrong reasons. A breakout of foodborne illnesses has scared investors into thinking that Chipotle would face a huge backlash that would result in a big drop in customers. The stock has plunged in response, falling from $750 per share in October to as low as $400 last month before bouncing back somewhat.

In the past, some other restaurant chains have faced trouble winning customers back after similar problems. But Chipotle has done everything it can to get in front of the situation, and it looks like it's handling things well. The Centers for Disease Control said at the beginning of February that it appeared the outbreak was over, and that should reassure regular visitors to return to their burrito-eating routines. In addition, Chipotle has given its local restaurants greater latitude to offer free food to customers, with individualized campaigns designed to keep customers happy and coming back for more.

Even though the company's quarterly results looked disastrous, things going forward will get better. That's good news for Chipotle shareholders, and it makes buying the stock now an attractive move.

What Happened in the Stock Market Today?