In the past six months, the yen has plunged in value relative to the dollar. Whereas $1 was worth less than 80 yen in late 2011 and throughout most of 2012, the exchange rate has moved by more than 20% since October, so that $1 approximately equals 94 yen. 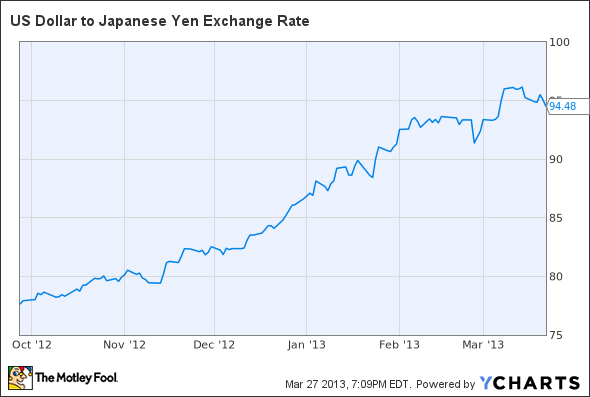 This devaluation has come about primarily because of a change in government in Japan. Shinzo Abe's LDP came to power in the December parliamentary elections, and Abe promised to restart economic growth by fighting deflation. Abe has since appointed a new governor of the Bank of Japan, Haruhiko Kuroda, who has promised a more dovish monetary policy. The shifting political winds have led to sharp declines for the yen against every other major currency.

A cheaper yen is a boon to Japanese exporters, such as automakers Toyota Motor (NYSE:TM) and Honda Motor (NYSE:HMC). By contrast, American automakers, such as Ford (NYSE:F) and General Motors (NYSE:GM) could be at risk as their Japanese rivals gain a cost advantage. However, the ultimate impact of the yen's move on these stocks depends on the strategies adopted by the Japanese automakers.

The yen's precipitous decline has made this point moot: the dollar cost of producing a car in Japan (with 100% Japanese components) is now nearly 20% lower than it was last summer. This is good news for all of the Japanese automakers. With lower costs, they can either pocket more profit per vehicle, or they can cut prices in order to gain market share in key regions like the U.S., while boosting export production to meet the additional demand.

However, this does not mean you should go running to buy Toyota today. While yen devaluation lowers production costs for vehicles built in Japan, it also lowers the dollar value of earnings from within Japan. This affects all of the Japanese automakers, but especially Toyota, which has captured nearly half of the Japanese market in recent years.

Moreover, the expiration of certain government tax credits in Japan in late 2012 led to several months of declining auto sales there. Lower sales volumes in Japan could cut significantly into profit for Toyota, Honda, Nissan, and other rivals. Toyota, as the dominant player in the Japanese market, would bear the brunt of any slowdown. Lastly, Japanese automakers have seen a significant drop in sales in China due to the fallout from a dispute over several islands last year. While the pace of declines has been leveling off in recent months, it is unclear whether Japanese automakers will ever be able to regain their previous market shares in China.

North American possibilities
In the North American market, the impact of yen devaluation largely depends upon the actions of Japanese automakers. If Toyota, Honda, and Nissan simply pocket the profits from a cheaper yen, devaluation would have no impact on other automakers, such as Ford and GM. However, there is good reason to believe that the Japanese automakers will aggressively cut prices or increase incentives to gain market share. This is exactly what these companies did in order to regain market share in late 2011, after tsunami-related supply chain problems had constrained sales in the spring and summer.

A significant increase in incentive spending could hurt Ford and GM, which have benefited from strong margins in North America recently, as the result of cost-cutting and new product introductions. Ford has seen particularly good performance, with a North American operating margin of 10.4% last year, which exceeded the company's long-term goal. If Toyota, Honda, Nissan, and others cut prices, Ford and GM will have to accept lower market share, lower margins, or both.

The one saving grace for Ford and GM is that they derive most of their profits from sales of full-size pickup trucks. Ford and GM dominate this market, while the Japanese automakers have little to no presence there. However, Toyota is about to make another push to gain a foothold in the full-size pickup market, with a redesigned Toyota Tundra coming this fall. I expect Toyota to price the Tundra very aggressively in order to give current Ford, GM, and Dodge Ram truck owners sufficient reason to switch. The Tundra could still flop, but if lower prices entice some customers away from Ford and GM, this could have an outsized impact on those companies' profits.

Foolish conclusion
The recent drop in the yen's value could have massive implications for the auto market.  Japanese automakers will generally benefit from the favorable exchange rate, but U.S. shareholders of those companies will also see a reduction in the dollar value of earnings from Japan. On the other hand, U.S. automakers like Ford and GM could see North American margins tighten if (as I expect) Japanese automakers ramp up incentive spending to chase market share. It is critical for investors to keep a close eye on developments in this rapidly evolving industry.