Over the last two weeks, I haven't pulled many punches when it comes to Annaly Capital Management (NYSE:NLY) and its executives' flagrant attempt at maximizing their own fortunes at the expense of transparency and accepted norms of corporate governance. I'm referring here to a proposal up for vote at the upcoming shareholders meeting to externalize Annaly's management structure. If you're not familiar with this and you own shares of the high-yielding mortgage REIT, then check out either or both of the following articles: Annaly Has a Credibility Problem and/or How Annaly Is Obfuscating Facts to the Detriment of Shareholders.

In response to these articles, I've gotten one of two reactions from readers. Some express gratitude for the information, presumably because they believe being aware of facts is better than being ignorant of them. Others can hardly contain their disdain, question my motivations, and/or suggest that I'm ignorant of what I'm talking about. To those of you in the latter group, I'm writing to address the overarching argument that Annaly's executives deserve impunity from criticism because of the performance of the company's shares over the last few years.

Just to make sure we're all on the same page, the issue here concerns the integrity of the top executives at Annaly -- and, for that matter, its publically traded subsidiaries Chimera Investment Corporation (NYSE:CIM) and CreXus Investment Corporation (NYSE: CXS). Over the last few years, they've justified their exorbitant compensation packages by claiming that the payments are predicated on performance. Here's how Annaly frames it in a recent proxy filing (emphasis mine):

[W]e pay for performance by structuring compensation so that the majority of cash compensation is comprised of discretionary bonuses linked directly to the value of our stockholders' equity. ... However, the growth of our stockholders' equity is dependent on our ability to regularly access the capital markets. We do not believe we will be able to regularly access the capital markets on favorable terms unless the markets believe our financial performance, and our executives' management of risk, warrants it.

As you can see, Annaly is drawing a direct link between "performance" and the ability to "regularly access the capital markets on favorable terms" -- that is, issue new shares. But here's the problem. Over the past 10 years, Annaly's outstanding share count has grown by more than 1,000%. Meanwhile, its total return to shareholders over this same time period is a much more modest 153% compared to the S&P 500's 122% return. Thus, any claim that Annaly's executives have earned their patently egregious payouts by dramatically outperforming the market or because they're merely getting paid for otherwise superior performance, simply isn't true. 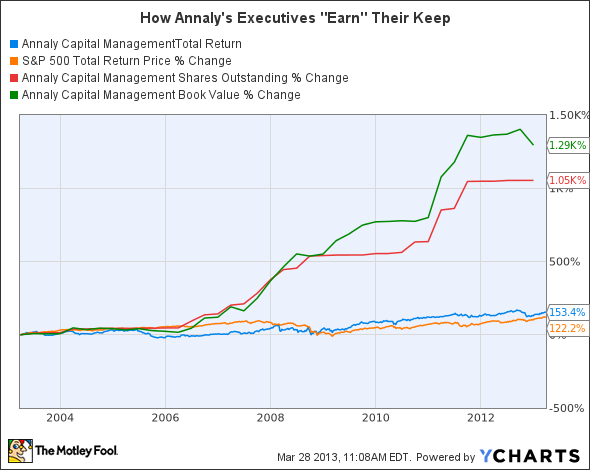 It also isn't true that Annaly's executives are somehow industry sages who know how to position the company better than the leadership teams at other mortgage REITs. This was the opinion offered recently by a colleague of mine to justify the $25 million payout to Annaly's CEO last year. Unfortunately, the data doesn't support this. In fact, the opposite appears to be the case. The metric proving this is the constant prepayment rate -- that is, the proportion of principal in a loan portfolio that's paid off prematurely over a designated time period. In a low interest rate environment, a high CPR decreases a mortgage REIT's earnings, and vice versa. Well, it turns out that at the end of last year, Annaly's CPR was 19%, while American Capital Agency's (NASDAQ:AGNC) was 11% and ARMOUR Residential's (NYSE:ARR) was 12%. Thus, if anything, Annaly appears to be the worst positioned of the major players in its industry.

Look, at the end of the day, the issue isn't technically about how much Annaly's executives are paying themselves. While that is certainly relevant, the broader point concerns the way in which they've portrayed these payouts to shareholders. They claim their outrageous compensation packages are conditioned upon performance when that's only true in the most tangential sense. And they fuel the misplaced impression of their brilliance through quarterly pontifications on their conference calls in lieu of serious analysis. It's almost as if they're trying to hide something. Which, of course, they are.

If there's any doubt about this, Annaly's management externalization proposal, which is on the ballot for the upcoming shareholders' meeting in May, should smother any remaining questions. By proposing to outsource the management of Annaly to a private company owned by Annaly's executives, these individuals will no longer have to even create the illusion that they're being paid for performance, as any disclosure requirements will no longer plague their obviously compromised consciences.