The fact that it's Monday doesn't mean there's a dearth of financial news. Here are the five biggest stories impacting the financial sector today.

The fact that it's Monday, doesn't mean there's a dearth of financial news. Here are the five biggest stories impacting the financial sector today.

1. End of first quarter
Yesterday officially marked the end of the first quarter. Generally speaking, it was a good quarter for the banking industry. As you can see below, all four of the nation's largest banks as well as the KBW Bank Index (INDEX: ^BKX) ended the three-month stretch higher, though all of them underperformed the broader market. Shares of Citigroup (C -0.06%) led the way up by 7.3%. The nation's third largest bank by assets was followed in quick progression by JPMorgan Chase (JPM -0.82%) and Wells Fargo (WFC -0.79%), which were higher by 7.2% and 6.3%, respectively. Bank of America (BAC -1.71%) turned in the worst performance of the too-big-to-fail lenders with a total return of only 1.2% -- though, it's worth noting here that B of A was far and away the industry's best-performing stock in 2012. 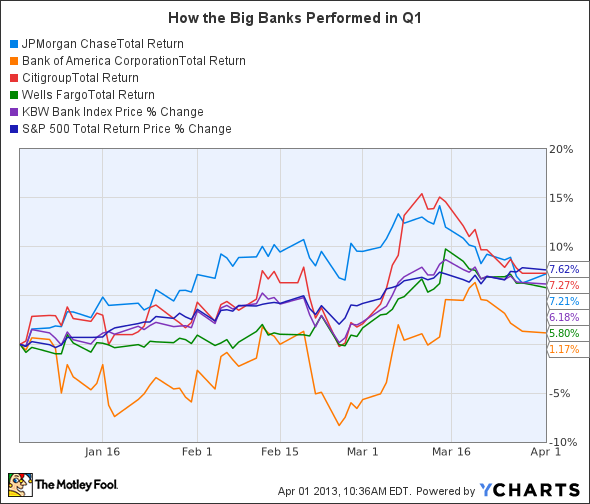 2. Cyprus
The unfolding situation in Cyprus continues to capture headlines. Over the weekend, Bloomberg reported that the country may impose losses of as much as 60% on uninsured deposits at the nation's largest banks. According to the report:

Customers will have 37.5 percent of their deposits above this amount converted into shares with full voting rights and access to any future Bank of Cyprus dividend, the Nicosia-based central bank said in an emailed statement. A further 22.5 percent will be temporarily withheld to ensure the lender meets the terms of its recapitalization, as agreed under Cyprus's loan agreement with international creditors, the central bank said.

The remaining 40 percent of Bank of Cyprus deposits above 100,000 euros that aren't subject to the bail-in will be temporarily frozen to ensure the lender's liquidity.

In addition, Russia confirmed that it won't step in to bail out any individuals or companies that stand to lose money. Speaking on Russian state television yesterday, the country's first deputy prime minister said: "If someone gets stuck and loses money in those two biggest banks, that's really too bad. But the Russian government isn't planning to do anything in this case."

No? Perhaps other tax havens will. According to The New York Times, many of the world's other opaque banking centers are stepping up efforts to woo bank customers that are fleeing Cyprus.

3. LIBOR lawsuits dismissed (in part)
Good Friday definitely lived up to its name for some of the world's biggest banks. According to Reuters, a "substantial portion" of the legal claims in private lawsuits against 16 megabanks have been dismissed by a federal judge in New York. The lawsuits accused the banks -- including JPMorgan, Bank of America, and others -- of rigging the London Interbank Offered Rate, a "key benchmark at the heart of more than $550 trillion in financial products."

4. SAC Capital
Good Friday wasn't quite as good for SAC Capital, the massive hedge fund run by Steven A. Cohen that's being pursued by federal authorities for insider trading. The day before, a federal judge rejected a $602-million civil settlement between the fund and the Securities and Exchange Commission. According to U.S. District Court Judge Victor Marrero: "There is something counterintuitive and incongruous in a party agreeing to settle a case for $600 million -- that might cost $1 million to defend and litigate -- if it truly did nothing wrong." Then on Friday, one of the fund's chief lieutenants was arrested, potentially adding to the growing number of insiders who may eventually testify against Cohen himself.

5. Data
Finally, the data out today points to a mixed economic picture. China's economy appears to be on the mend. As noted by Reuters, the country's official manufacturing purchasing managers' index rose to an 11-month high of 50.9 -- a reading above 50 suggests expansion. And a separate survey by global bank HSBC estimated a final PMI of 51.6 last month, up from 50.4 in February. On the domestic front, meanwhile, the ISM manufacturing index came in at 51.3 compared to a consensus forecast of 54.2 while construction spending was up 1.2% in February, beating expectations by 20 basis points.