The economy is still expanding, according to the Institute for Supply Management's manufacturing index, which came in at 51.3 for March, the fourth consecutive month of growth it's recorded. But it was well below expectations of 54.0, and with new orders tumbling to just 51.4 from 57.8 -- a better than 6% decline -- it's suggestive of a U.S. ready to slip back into recession. 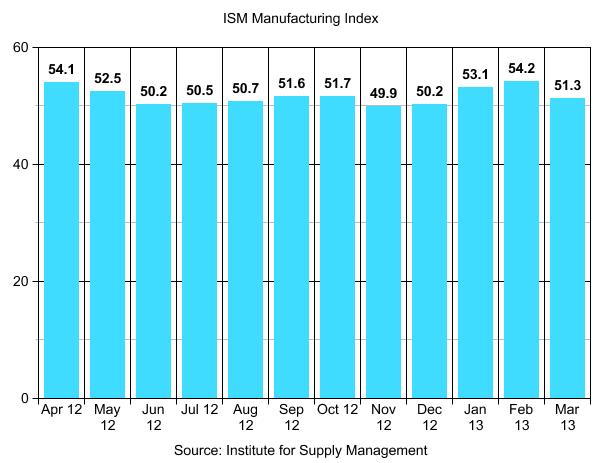 An index above 50 is considered an expanding manufacturing economy, and, naturally, below that level is contraction. The index was driven higher last month based on the strength of the auto and housing industries, aligning with what's been seen in those markets. General Motors (GM 1.35%), for example, recorded a better than 6% jump in new-vehicle sales in March, while Ford (F 1.71%) was up just less than 6%. Chrysler came in third at 5%.

Not just muscle cars
Their sales of full-size pickup trucks were also robust, and analysts said that would coincide with the strength of the housing markets in recent periods. According to just-released Commerce Department data, private residential construction climbed 2.2% to $303.4 billion, its highest level in more than four years.

When Hovnanian Enterprises (HOV 7.97%) reported its quarterly results last month, the homebuilder showed a narrower loss than the year-ago figure based on higher sales and new orders. With analysts at Morgan Stanley forecasting pricing strength in the market this year -- anywhere from 2% to 10% growth is seen in 2013 -- the sector could be a bright spot, and builders could be ones to watch.

Rise of the machines?
What investors really need to keep an eye on is that falloff in new orders, as machinery was one of just three sectors seeing contraction (petroleum and coal and chemical products were the other two). We did see the global PMI just come out a bit stronger than February, and that was helped along by China, which was stronger than anticipated.

The warning shot again, however, is Europe, where output declined and unemployment of 12% across the eurozone is at record high levels. The dire financial situation unfolding in Cyrpus is waiting for a match to ignite it across the continent.

Offsetting some of that negativity is the rise of manufacturing jobs here at home, which grew 1.6% in March, but with industrial suppliers MSC Industrial Direct (MSM -0.55%) and Fastenal (FAST -0.36%) having previously warned of industry weakness, and with both due to report earnings next week, we'll know whether the softness they experienced last quarter plays out. These companies rise and fall with the PMI indexes, domestic and global, and the mixed signals we've gotten suggests that their earnings won't provide much clarity.

If the eurozone financial contagion spreads, it's an all-bets-are-off scenario, but I'm already pessimistic we'll be soon heading back down the rabbit hole.