Chinese Purchasing Managers Index data has conflicting effects on the price of gold and the global economy.

China's Purchasing Managers Index rose last month, with a March reading of 55.6 relative to the February reading of 54.5; remember, a reading above 50 indicates expansion and is usually deemed positive for the economy. The rise was led by a 4.5 point increase in the construction sub-index to achieve a March level of 62.5. While the increase is a positive indicator for the Chinese economy, the level rising less than expected mirrored both U.S. and eurozone reports.

While the expansion indicates a move toward increasing stability for the Chinese economy, and thus the global economy – a bearish factor for gold – the fact that the reading came in below expectations provides some support for the commodity. Perhaps tipping the scale is the fact that weaker than expected growth in China is bullish for the U.S. dollar. On a short-term basis, positives for the dollar tend to have an immediately negative impact on gold. Gold, as represented by the SPDR Gold Trust (GLD 0.07%), suffered its worst loss in several weeks during Tuesday's session.

Mixed signals
With industrial production numbers coming in weaker than expected across the globe, you might think that this sign of weakness for the global economy would be seen as positive for precious metals. The market has interpreted softening PMI numbers, however, as a sign that industrial demand for the metal may contract. This element of demand has played a critical role in supporting precious metals prices over the past several weeks.

Behind the expansion in the Chinese construction numbers is the $150 billion in approved infrastructure projects that the government is using to combat slowing growth. While still booming by most Western standards, China's GDP growth fell to 7.8% for 2012 – this represents its lowest level in 13 years. Again, while slowing global GDP growth is typically listed as a bullish sign for precious metals, the bearish factors are winning the day of late.

Chinese weakness and muted inflation concerns have been positive for the dollar and negative for gold. In a recent research note, Michael Haigh and Patrick Legland of Societe Generale noted: "inflation has so far stayed low (U.S. inflation has been trending lower since late 2011) and now we are beginning to see: 1) the economic conditions that would justify an end to the Fed's QE; 2) fiscal stabilization that has passed its inflection point; and 3) a US dollar that has begun trending higher." The pair shares one of the most bearish views of gold on the street.

Looking ahead
Where the GLD has been weak, gold miners like Goldcorp (GG) and Barrick Gold (GOLD 0.19%) have been even weaker. Year to date, the ETF is down roughly 6.5% and both miners have fallen double digits. Goldcorp, which recently announced the closing of a $1.5 billion note offering to help fund its ballooning operating costs, will release first-quarter earnings on May 2. Barrick, recently announced negative operating results for the entirety of 2012, again on rising costs. 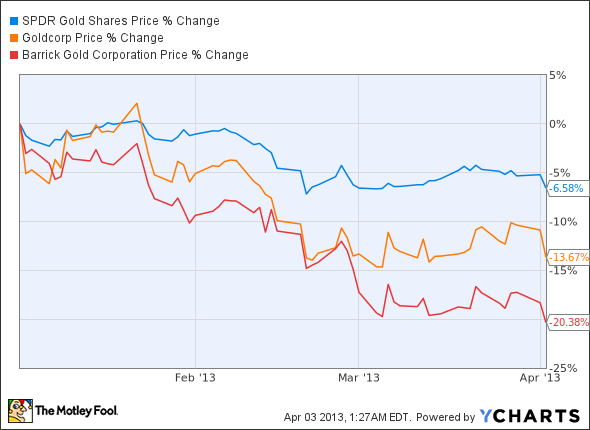 The spread between the commodity and the miners has been quite severe, worsening thus far in 2013. While some of the news from China has long-term positive elements for gold, the short-term negatives are too strong to ignore. Until gold shows more signs of stabilizing, I would likely be cautious of establishing new positions.