These stocks just rolled over. Which ones will bounce back?

Economic worries here at home -- let alone the financial crisis bubbling in Europe -- hit financial stocks on the Dow Jones Industrial Average yesterday, which fell 111 points. The biggest loser was JPMorgan Chase, which lost nearly 3% yesterday, followed by Bank of America at a 2.8% loss, and 2% drop at American Express.

The jobs outlook was disappointing as ADP posted its lowest monthly increase since October, and non-manufacturing data came up weak with the ISM index widely missing expectations. Coupled with a big miss on the part of manufacturing the day before, there is every indication that the U.S. economy is wobbling again.

After a heady first quarter by the Dow, I continue to believe this is a time for investors to take a break from the market.

A real car wreck on the horizon
While the near-12% drop in the stock of Consumer Portfolio Services (CPSS 2.58%) started early in the morning, a midday report by Reuters on the possible bursting bubble in subprime auto loans is indicative of widespread troubles in the industry CPS services.

Credit reporting agency Equifax says subprime auto loans surged 18% in 2012, but Reuters says bankruptcy filings it's reviewed are showing those loans cropping up there in larger numbers. That could soon be a problem for Consumer Portfolio Services, a specialty finance company that provides indirect automobile financing to individuals with past credit problems, low incomes, and limited credit histories. Last month, it announced the closing of its first term securitization of 2013 and said institutions purchased $185 million worth of its asset-backed notes secured by automobile receivables.

The apparent popularity of such securitizations caused Fitch Ratings to issue a general warning that credit terms were being loosened to a worrisome degree. Others note it's an all-too familiar scenario, pointing to the housing market's collapse in 2007. While auto loans won't impact the economy in nearly the same way as housing did, we're starting to see that bubble form again, too.

The Obama administration is pushing for banks to once again make risky loans to unqualified buyers in an effort to keep the housing recovery going. Using taxpayer-backed institutions like FHA, the The Washington Post says the administration is encouraging lenders to relax their guard. I guess we never really do learn.

Specialty finance leader Credit Acceptance (CACC -2.67%) has performed well since hitting a low point last November, rallying almost 50% higher in the intervening weeks, but it's pulled back from the highs it recently hit, and we're likely to see more names in the space start feeling the pinch, too. As the economy unravels once more, consumers at the bottom of the heap will cause the industry's foundation to crumble.

Lights out for solar
Another industry in trouble is solar energy, and most of the names in the space fell yesterday, though Yingli Green Energy (NYSE: YGE) and Sunpower (SPWR -0.48%) were the two biggest losers, falling 11% and 10%, respectively.

While there was no company-specific news to account for any of the solar shops falling, there are reports out of China that its banking regulatory commission highlighted the industry as one of nine that present undue risk, which may make obtaining much-needed loans for the financially strapped companies all the more difficult. With Suntech Power's subsidiary filing for bankruptcy, eyes are on the balance sheets of Chinese solar companies, and as the Fool's Arjun Sreekumar pointed out just the other day, they're not liking what they see. China's debt problem could reverberate through debt-ladened shops like Yingli, which saw its outstanding debt triple even as profits collapsed over the past few years. 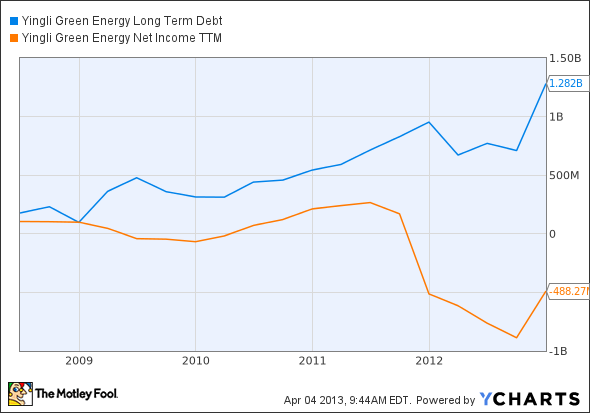 With Chinese solar energy prospects on shaky ground, growth not looking possible, and bills coming due, I see no reason to think these players have any real chance of turning around before going bust. If the Chinese banking regulators are sounding the alarm, who are we to ignore the warning?