Please ensure Javascript is enabled for purposes of website accessibility
Log In Help Join The Motley Fool
Free Article Join Over 1 Million Premium Members And Get More In-Depth Stock Guidance and Research
By Rich Duprey - Apr 5, 2013 at 10:11AM

The company says it has plenty of liquidity available to it for the current fiscal year.

In an effort to maximize the value of the company for all stakeholders, lead-acid battery maker Exide Technologies (NASDAQ: XIDE) announced that it has hired the financial advisory firm of Lazard to advise the company on financing alternatives. The stock tumbled 48% on the news.

Exide is one of the world's largest producers and recyclers of lead-acid batteries primarily selling to aftermarket retailers, though it also counts OEMs among its client list. Replacement batteries represent about 78% of its transportation segment revenues and thus approximately 48% of its total revenues.

Analysts have expressed concern that with $55.8 million worth of floating rate convertible senior subordinated notes coming due this year, it might not have the financial wherewithal to meet its obligations. However, concurrent with hiring the financial advisor, Exide also noted that it expects its fiscal 2013 fourth-quarter free cash flow will be approximately $50 million, exceeding the guidance it gave last December of $30 million. It will also have more than $230 million in total liquidity, including cash and all available credit lines.

Exide says it will not make any further announcement about the strategic review process until it's finished. 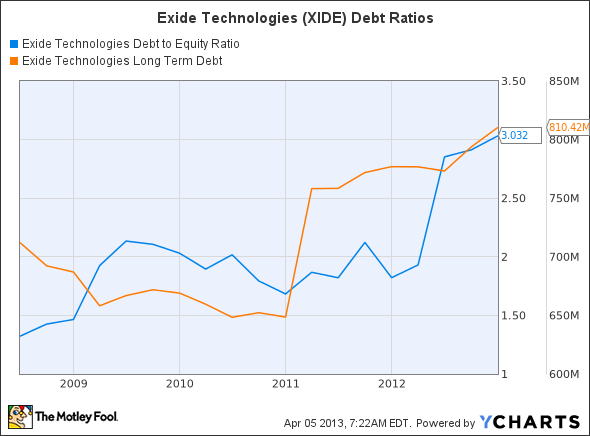