Let's see what the numbers say about BlackBerry.

Investors love stocks that consistently beat the Street without getting ahead of their fundamentals and risking a meltdown. The best stocks offer sustainable market-beating gains, with robust and improving financial metrics that support strong price growth. Does BlackBerry (BB -3.53%) fit the bill? Let's take a look at what its recent results tell us about its potential for future gains.

What we're looking for
The graphs you're about to see tell BlackBerry's story, and we'll be grading the quality of that story in several ways:

What the numbers tell you
Now, let's take a look at BlackBerry's key statistics: 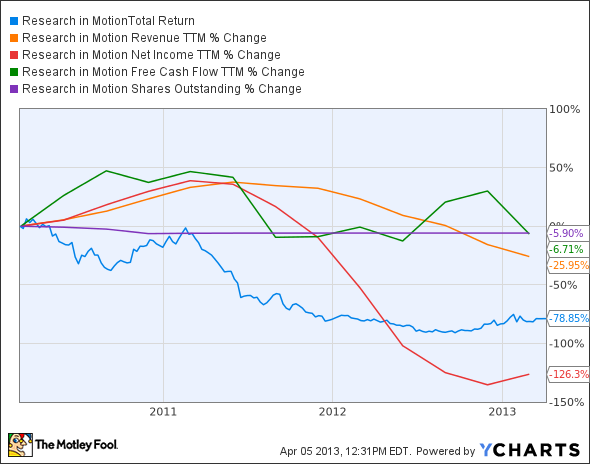 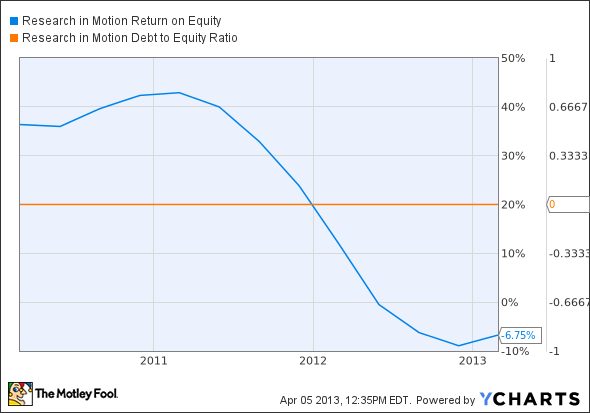 How we got here and where we're going
BlackBerry's shortcomings are by now well-known, but its fundamental deterioration is not as complete as many investors may think. Free cash flow has actually held up better than revenue, which is rare, and BlackBerry has long operated debt-free, which gives it a lot of flexibility to fight back against the industry leaders. The big question remains: Can BlackBerry effectively fight back? It's earned only two passing grades this time, and will need a monster performance in 2013 to get back into positive territory.

BlackBerry's latest earnings report proved to be a mixed bag several days ago. Despite the earnings beat recorded for the fourth quarter, shares barely budged. The company also sold a million Z10s, many of which went to first-time buyers (who switched from other operating systems). Cash balances even held up better than expected. So why the mixed bag?

Well, let's start with the obvious: BlackBerry is so far behind smartphone OS market leaders Google (GOOGL -4.95%) and Apple (AAPL -1.92%) that its market share barely even registers. At this point, the former Research in Motion has slowed to a crawl, and is losing ground to Microsoft's (MSFT -0.40%) Windows Phone OS -- but beating Microsoft only lands BlackBerry back in a distant third place. BlackBerry was once the king of "smartphones" before most people used the word to describe the category. Since Apple (and then Google) arose with a new touchscreen mini-computer standard of design, BlackBerry's been struggling to catch up.

The problem with that effort is pursuing a "me, too" strategy in the smartphone market isn't likely to move the needle enough from an investment standpoint. My fellow Fool Adam Levine-Weinberg points out the obvious: Everyone is pretty much doing the same thing. That works well enough for the companies that jumped ahead when that thing was new and exciting, but when you're starting 50 yards behind on the 50-yard dash, you practically need a jet pack to catch up. The Z10 doesn't look like that jet pack. In my humble opinion, it doesn't even look as interesting as the Nokia Lumia line of Windows phones -- and when smartphones become commodities, the pretty commodities are likely to beat the bland ones.

BlackBerry's quarterly shipments have declined every quarter for over a year now. Its latest quarter saw just 6 million smartphones shipped -- yet another dangerous slide. While there's a case to be made that BlackBerry has a low bar to hurdle to look good again, the fact that it continues to miss that bar should give investors serious pause. How can you show momentum when fewer people want your product every month?

Putting the pieces together
Today, BlackBerry has few of the qualities that make up a great stock, but no stock is truly perfect. Digging deeper can help you uncover the answers you need to make a great buy -- or to stay away from a stock that's going nowhere.