A more than trillion-dollar plan will dramatically increase Japan's money base. What does this mean?

While the death of innovation remains a hotly debated topic, at least central banks aren't lacking new ideas. From the first use of quantitative easing by Japan, to the European Union's "orderly default" of Greece, to the U.S. Federal Reserve's "QE infinity," to the seizure of Cypriot assets, bankers seem to be one-upping each other in the creativity department with new policies to support fragile global economies. And now, in its fight against deflation, Japan plans to regain its crown for most creative policy by doubling its monetary base over the next two years.

Just how big is Japan's plan? What effects could it have worldwide? 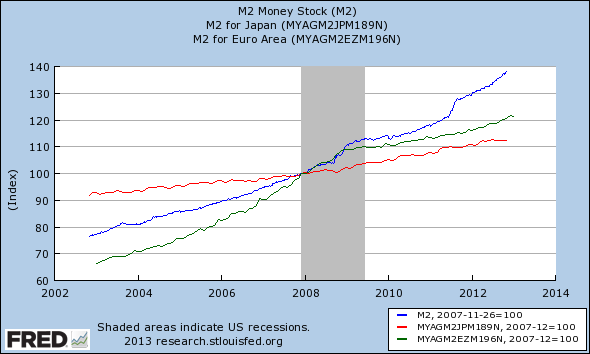 Above, you can see the monetary base for the U.S., Japan, and the Euro area. During the recession, the Federal Reserve began to buy mortgage-backed securities in what was named QE1, and from 2008 to 2010 the Fed's balance sheet grew from about $700 billion to more than $2 trillion. In 2011, the Fed added another $600 billion during QE2, and now QE3 remains an open-ended program in which the Fed purchases $40 billion in mortgage-backed securities per month. This amounts to about 0.5% of GDP per month.

Japan's new plan will add roughly double that amount at 1% of GDP per month. The Bank of Japan will buy long-term government bonds to double the monetary base from 135 trillion yen to 270 trillion yen by March 2015. The goal is to achieve a 2% rate of inflation within two years.

The effects
Japan is the world's third-largest economy, so doubling the money supply will certainly have global effects. A few Chinese economists have called the plan "monetary blackmail" and think China should devalue its yuan to compete. They fear that with a weaker currency, Japan becomes more attractive as a place to buy goods. This only heightens tensions between the countries after they sparred over ownership of the Senkaku Islands.

After Japan announced the plan, yields on government bonds in Europe hit record lows. With the Japanese government's plan depressing bond yields, investors are more interested in other governments' debt, especially given the plan for a weaker yen.

Toyota (TM 1.70%) and Honda (HMC 0.96%) both jumped nearly 5% last Thursday on the news, as a weaker yen makes it cheaper for the companies to build cars and more lucrative to sell them in foreign markets like the U.S. However, both Honda and Toyota now build a majority of the cars that they sell in the U.S. in North America, so currency changes will have less of an effect than in the past. Last year, a Japanese government stimulus program helped the country's carmakers record about a 25% increase in domestic sales. The program offered as much as about $1,000 in subsidies for buyers, but it has since ended, and domestic sales have dropped for six months -- they fell 16% last month alone. With a bleaker situation in their home market, Japanese automakers could use whatever help a weaker yen could offer.

In the long term, Japan has plenty of economic obstacles. The country has had a budget deficit of about 10% for the past three years, and it has the highest government debt as a percentage of GDP in the world. Additionally, an aging population is a social issue that can't easily be solved by a central bank. If the new stimulus can't reignite the economy and bring Japan's economy into a more stable and prosperous position, expect its policymakers to become even more innovative. And in the future, who knows just how far they'll have to go to impress.

Should You Really Be Investing in the Stock Market Right Now?