Zynga founding CEO Mark Pincus just lowered his salary to $1 as the company launched its first real-money gambling titles. Will this help Zynga climb back to IPO levels?

Let me start by admitting that I've never been fond of Zynga (ZNGA -2.04%)from an investment standpoint.

While its games might be mildly entertaining, I've voiced skepticism for its buybacks and acquisitions, questioned the sustainability of its business model, and frowned at the seeming lack of faith in the company demonstrated by founding CEO Mark Pincus. Remember, after all, that Pincus sold around 16 million Zynga shares for nearly $200 million just two months before the stock tanked on its terrible second-quarter results last year: 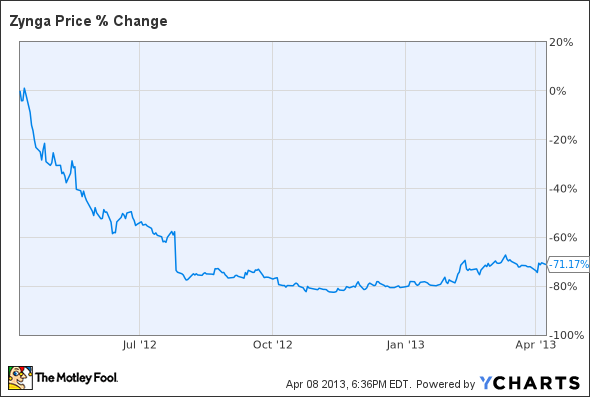 What's more, I certainly wasn't alone in my distaste of the company. The Motley Fool community as a whole voted Pincus the worst CEO of 2012, with additional thanks to Zynga's skyrocketing R&D costs, a mass exodus of executive and engineering talent, and a crumbling share price.

Departure from the norm
Even so, that's exactly why it's so interesting that Pincus last week not only voluntarily lowered his salary to $1, but also opted out of the company's cash bonus and equity award programs in 2013 in a radical departure from his previous actions.

Could this be his first step toward making amends with angry shareholders? Maybe.

Then again, perhaps he's just trying to put on a show in the fallout of his decision to sell in the face of multiple nasty insider trading allegations.

Can this house win?
However, Zynga did jump by as much as 17% last Wednesday after the company made good on its promise of officially launching its first real-money gambling titles in the U.K., including ZyngaPlusPoker and ZyngaPlusCasino. As fellow Fool Tim Beyers pointed out last week, even Zynga haters have found themselves intrigued by the massive upside potential of its bet on real-money gambling games.

Apart from this unproven revenue stream, however, I still remain firmly in the camp of doubters who wonder whether the company can actually innovate to stay afloat. After all, The Sims Social game creator EA (EA 0.57%) sued Zynga last year, claiming the smaller company blatantly copied The Sims franchise with its own version titled The Ville. While the two companies settled the suit out of court in February without disclosing terms, fellow Fool Evan Niu astutely noted many, if not all, of Zynga's games at the time of the lawsuit appeared to have eerily similar roots in other companies' existing titles. EA, for its part, seemed to be the only company with a large enough presence to be willing to officially call a spade a spade on paper.

Game-specific spats aside, I'm also concerned that Zynga won't be able to consistently pump out a large enough number of massively popular, low-priced games with its core business to keep players entertained for any extended period of time. This lack of long-term sustainability is exactly why I would much prefer owning shares of EA or, better yet, gaming stalwart Activision Blizzard, which consistently generates tons of cash from loyal subscribers of such innovative full-featured game franchises as World of Warcraft and Call of Duty.

In the end, despite Pincus' new-and-improved salary and the company's recent gambling efforts, I'm still not convinced Zynga has what it takes to not just survive but thrive over the long haul.