Please ensure Javascript is enabled for purposes of website accessibility
Log In Help Join The Motley Fool
Free Article Join Over 1 Million Premium Members And Get More In-Depth Stock Guidance and Research
By Brian Stoffel - Apr 10, 2013 at 11:47AM

A little bit of global luck, combined with a focus on collaboration and autonomy has this CEO earning rave reviews.

Over the past few days, I've covered CEOs 25 through 4. Today, I'm going to introduce you to the company with the third-highest-rated CEO, give you some background on the company, and at the end, I'll offer access to a special free report on who is going to win the war between the five biggest tech stocks.

Cognizant Technology (CTSH 1.10%)
Cognizant is a specialist in technology and outsourcing consulting. It is the second technology-consulting firm to have a CEO in the top 25, as Accenture's Pierre Nanterme was ranked as seventh overall this year.

In understanding why technology-consulting can be such a big business, I think fellow Fool Dan Caplinger put it best: "With constant advances in technology, many companies simply can't keep up without outside help." And that makes sense, if one is focused on clients, there hardly seem to be enough hours in the day to serve them and keep abreast of all the ways the latest technology can help you serve them.

That helps explain why Accenture and IBM, the industry's two biggest players, have been able to gobble up so much market share. But there's a second tier of technology-consultants -- in terms of sheer size -- as well. That's where Cognizant, as well as its main competition -- Infosys (INFY -0.40%) and Wipro (WIT -1.50%) -- come in to play.

One of the key differentiators between Cognizant and its two closest competitors is location. While Infosys and Wipro are located in India, Cognizant is headquartered in New Jersey. That might sound like as disadvantage -- as much of the outsourcing occurs in India -- but lately, it's been more of a boon.

Take a quick look at where these three companies get their revenue. 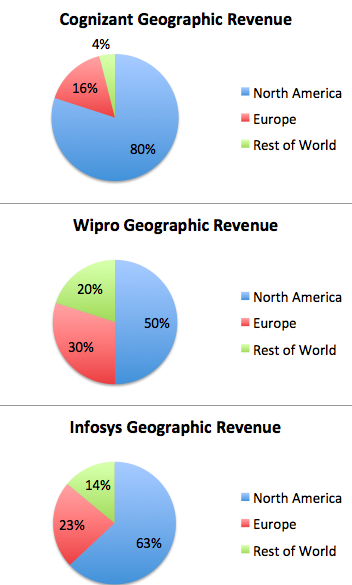 Source: SEC filings. Wipro numbers are for all of "Americas," not just North America.

What might look like a weakness for Cognizant -- in that its clients are mainly centered in one region -- has been a strength over the past few years, as North American economies have recovered from the Great Recession much quicker than other regions of the world (Europe especially).

A leader to take the company global
But as you might guess, remaining focused solely on North America could eventually become a weakness, when other economies start heating up in other spots. That's where CEO Francisco D'Souza comes in. D'Souza has been leading Cognizant since 2007, and has worked for the company since 1996 -- first as a consultant himself, then as an employee.

Instead of focusing too heavily on Europe or Asia, D'Souza is zeroing in on Brazil. As Foolish colleague Ketih Speights pointed out  in August, "During the company's earnings call, D'Souza noted that Cognizant won several new clients in Brazil after establishing a strong local leadership team and building out a local delivery center."

While this focus on international growth is good to see, there are likely other reasons why D'Souza's employees give him a 96% approval rating. Most notably is his focus on collaboration and autonomy. In an interview with Spencer Stuart, D'Souza said: "The competencies that the firm is going to have to learn [to] pivot around [is] collaboration internally -- so-called boundary-less thinking. We've been very successful up until now building the company based on very empowered business units, where we've got folks who think of themselves as 'CEOs' of business units."

When employees feel valued, autonomous, and are encouraged to collaborate with one another, good things happen.  That probably helps explain one of the reasons shares of Cognizant have returned over 300% since the market bottom in March of 2009, far outpacing the S&P 500.