It's one of the cheapest, best performing, most cash-gushing cereal companies around.

It might not be obvious to the casual observer, but right now, today, General Mills (GIS -0.75%) stock offers one of the best values available in the packaged-cereals industry. Why?

General Mills is cheap
When you stack up General Mills stock against two of its bigger rivals -- Kellogg (K 0.38%) and ConAgra Foods (CAG -0.93%), which bought cereal maker Ralcorp late last year -- it's clear that General Mills is the cheapest of the three. Its 17.9 price-to-earnings ratio is a full 25% cheaper than what a share of Kellogg will set you back. It's a whopping 34% discount to the P/E ratio at ConAgra.

General Mills has the best record around
General Mills stock looks great in the rearview mirror, and nearly as good when viewed through the windshield. Over the past five years, it's grown its annual sales 25% faster than the closest rival, notching 6% annualized sales growth to ConAgra's 4.8%. General Mills has outperformed Kellogg's 3.8% rate of sales growth by an even wider margin -- and its profits growth has similarly outperformed all comers.

General Mills pays you best
Perhaps most important to investors, though, is the simple fact that out of the three big cereal concerns discussed above, General Mills is the firm generating the most cash from its business -- and gives you the biggest free cash flow bang for the buck. 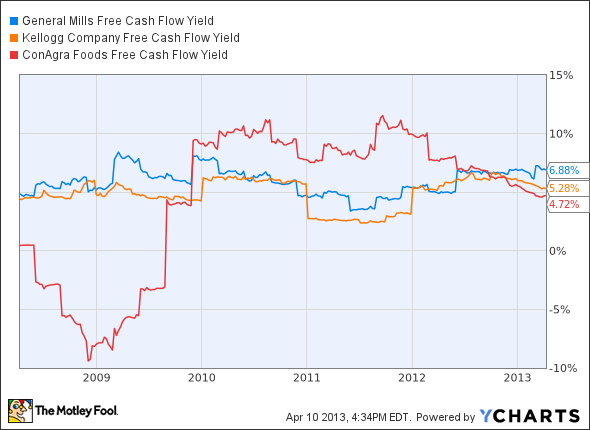 General Mills may ultimately use this cash to pay you bigger dividends (it already pays a 3.1% dividend -- more than either Kellogg or ConAgra), to buy back shares (increasing the size of your stake in the company for every share it takes off the table), or to reinvest in its business and maintain its lead over rivals for years to come. Any way you look at it, though, General Mills' ability to generate cash offers investors a great reason to invest.

And that, Fools, is the reason I think now's a great time to buy General Mills stock.